Fifth-generation LS shares its platform with the LC coupe, range kicks off with a twin-turbo V6 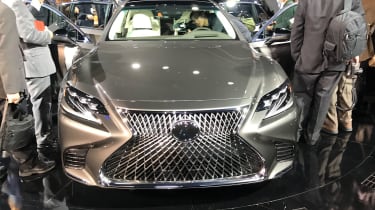 The fifth-generation car sits on an extended version of the company's rear-wheel drive luxury vehicle architecture, codenamed GA-L. The same platform - albeit in a shorter format - underpins the new LC luxury coupe.

And the new LS really is a large car, longer and wider but lower than the model it replaces. Crack out the tape-measure and it'll extend 5235mm from bumper to bumper, with a long 3125mm wheelbase in between. At 1900mm it's 25mm wider than before, but with a 1450mm roofline it's up to 31mm lower than the previous car.

To haul the sharply-styled new body along (no weight has been confirmed, but the LC 500 coupe is a hefty 1935kg) Lexus has designed and implemented an all-new 3.5-litre V6, specifically for the LS.

As you'd expect, the downsized power unit is designed to mix power with efficiency, though with a hybrid model likely on the way the V6 will likely serve as an entry-level model of sorts. The V6 develops 415bhp and 443lb ft of torque, both improvements over the outgoing V8 (though shy of those developed by the V8 used in the LC 500 coupe).

Still, it's enough power to realise a 4.5-second 0-62mph acceleration run, with all-wheel drive. The transmission is a ten-speed automatic, as seen in the LC, and while the unit is of the torque converter type, Lexus promises shift times on par with the dual-clutch units used elsewhere. Changes can be operated with paddles behind the steering wheel, but we suspect few will bother - despite claims the LS is more of a driver's car than before, it's unlikely to be put into service as a B-road tearaway. 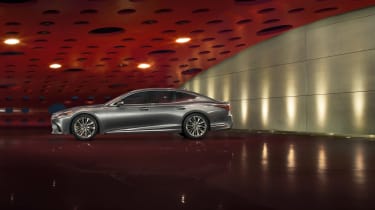 It should still be better than before. The new body-in-white, a mixture of high-tensile steels and aluminium, is said to be 90kg lighter than before, and more rigid too.

To this, Lexus has applied its latest generation of Vehicle Dynamics Integrated Management - a catch-all term for all the variable electronic parameters of the car, including braking, steering, powertrain and suspension. There are active anti-roll bars too, and rear-wheel steering.

One area Lexus has worked hard to step up its game is in the cabin. While the old LS was hardly impoverished, subsequent arrivals like the current Mercedes-Benz S-class have moved the game on for cabin ambience and quality.

Visually at least, the new LS interior looks very special indeed, with luxurious hides, fine-grained woods, ambient lighting and the required levels of technology. That central screen is a 12.3-inch display, now operated by a new touch-operated interface, while cabin noises are kept to a minimum with Active Noise Control.

Full pricing and specification details are yet to be confirmed. You can read about more new cars from the Detroit auto show by heading to our show hub page.