New Jaguar XF Sportbrake revealed – the most elegant estate on the market? 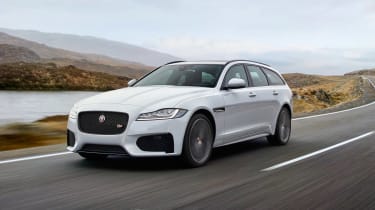 Jaguar has removed the camouflage and taken the covers off its new XF Sportbrake, the new estate version of its mid-sized saloon. The new car will go head to head with the ever so popular BMW’s 5-series Touring and Audi’s A6 Avant, costing from £34,910.

If Jaguar’s styling and design department could be criticized of anything it’s that that the changes it makes from one model to the next, and differences even across its range of cars, are just too subtle. But this new XF Sportbrake looks decidedly different from the previous model launched back in 2012.

Most notably, the floating roof, thanks to a blacked-out rear-most pillar, has disappeared. Instead a thin strip of steeply raked bodywork connects the back of the roof to the lower half of the back of the car. Without any abrupt stops to the lines or harsh angles as before, the new Sportbrake’s lines flow better making the old car, that was considered very handsome, now look a bit disjointed.

> Read our review of the Jaguar XF saloon here 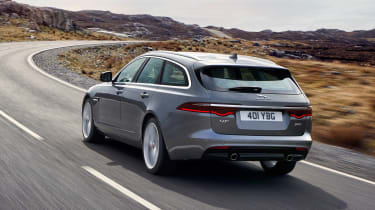 What looks to be a dainty, delicate pillar, though, is a significant and hefty part of the car. From inside you can clearly see that the d-pillar is by the thickest of all of the roof supports, but the exterior styling hides that impressively well.

Much like its predecessor the new XF Sportbrake has a less boxy and square silhouette than most traditional estate cars. The long roofline arcs down at the rear, as does the waistline, so that everything tapers at the back giving it a very sleek shape.

Current Jaguar styling trademarks of clean shapes and few, minimal but well-wrought details are apparent on the Sportbrake; there’s very little in the way of superfluous decoration. Yet it still looks luxurious, even pretty, rather than utilitarian and staunchly functional, that’s thanks to those flowing lines rather than any boxy shapes. 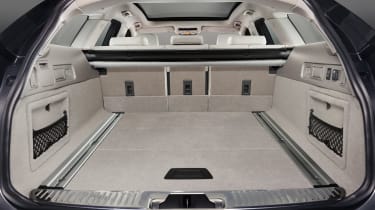 But there’s a reason why estates are often brutally rectangular, it’s to make efficient use of space. The XF’s swooping rear end doesn’t bode well for maximum loads space, but that’s not to say it the entire car isn’t practical enough. The standard roof rails can be loaded with up to 100kg of weight for extra storage. While the areas above the rear wheels have been comprehensively repackaged compared the XF saloon to make them as small as possible, and the boot as wide as possible. The rear seats can be folded flat with a quick press of a button from the boot, too.

The Sportbrake can also come with Jaguar’s Activity Key, a waterproof bracelet that lets you unlock the car if you wave it over the certain areas of the car. The boot can then be opened if you pass your foot underneath the rear bumper. This means you could walk up to the car, unlock it, then easily open the boot with your arms still completely full with your surfboard, kids, shopping etc.

Jaguar knows the Sportbrake will be used for a whole manner of load-lugging and towing duties, as is the obligation of an estate car. So that it’s suited to carrying heavy weights, and can adjust it ride height accordingly, it has air suspension as standard on the rear axle. The front has been left as coil springs as Jaguar didn’t think there would be much need to increase the car’s height there too. However, the front dampers have had to be retuned to suit the new rear suspension; the engineers hadn’t anticipated they would need to, but it became clear during testing that the car’s standard adaptive dampers would need to be recalibrated if the Sportbrake were to maintain much of the standard XF’s handling traits. 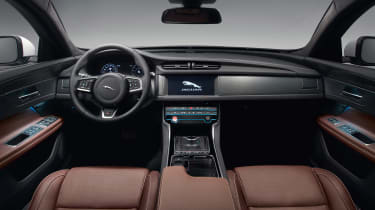 Despite the more complex rear suspension and a host of extra bracing, the estate body is not quite as stiff as the saloon’s but ‘very close’, the also Sportbrake weighs just 115kg more than the regular four-door. Even more impressive is that, thanks to the innovative space-saving packaging, its weight distribution is still approximately 50:50 front to rear. Hopefully that will ensure the Sportbrake will drive just as well as the regular XF although we will have to wait till we get to drive it on British roads to be sure.

What doesn’t bode quite as well for ultimate dynamic polish is the large panoramic sunroof; extra weight so high up is never beneficial. However, it may well be worth the sacrifice. The 1.6 metre long glass roof, the longest Jaguar’s glass supplier could physically make, stretches across almost the entire length of the car’s roof. What’s more, it isn’t interrupted by any bracing or joins and the vast expanse of glass creates a brilliantly airy and bright cabin.

The Sportbrake will be available will the same range of engines and gearboxes as the current XF saloon. That means a choice of a 161bhp, 178bhp or 237bhp four-cylinder diesel engine, a 247bhp turbocharged in-line four petrol. Or, if you want more cylinders, a V6 diesel will also be available, however the UK will not be getting the 375bhp supercharged V6 petrol available on the saloon. Only the lowest powered diesel is available as a manual, while the rest of the range use an eight-speed auto and, if you wish, four-wheel drive on the mid and high level 4-cylinder diesels.

Unfortunately, it is unlikely that Jaguar will be making a hot SVR version to rival the upcoming Mercedes-AMG E63 Estate and instead focus on giving the F-Pace SUV the SVR treatment.