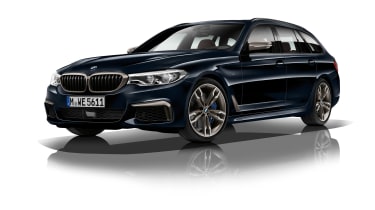 BMW has just released details of the new M550d xDrive, the flagship diesel powered 5-series, which boasts the most powerful six-cylinder diesel engine in production.

Based on the latest G30/G31 5-series, the M550d is the latest addition to BMW’s M Performance range and offers up some impressive numbers to back up its performance moniker. The 3.0-litre straight-six diesel engine is aided by a total of four turbos. There are two high-pressure variable geometry turbos and another two low-pressure units with super low inertia for added response at low rpm. The result of this complex staged turbocharging is a peak power figure of 394bhp at 4400rpm and 560lb ft of torque spread between 2-3000rpm.

With each of the turbos carefully controlled to aid either response or outright power, the two low-pressure turbos and one of the high-pressure units are always running regardless of rpm, while the second high-pressure turbo will kick in above 2500rpm. This should help the M550d maintain excellent response in-gear without the turbo lag usually associated with heavily turbocharged engines. 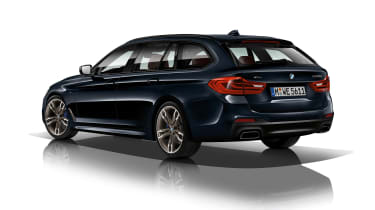 Fitted with BMW’s 8-speed ZF automatic transmission, the M550d is said to return 39.9mpg on the combined cycle, although the Touring model drops this number to 37.9mpg. Probably wisely, no manual model is available.

Performance figures are impressive, with the saloon sprinting to 62mph in 4.4 seconds (the estate takes an extra 0.2 seconds). Also standard is M sport suspension, although BMW will offer an adaptive setup to work in conjunction with its Dynamic Drive system. That boils down to a set of hydraulic stabilisers on each axle, helping keep the M550d’s weight in check when pressing on.

With BMW’s xDrive all-wheel drive system as standard, putting down all that power shouldn’t be a problem, even in compromised weather, but BMW assures us that the rear-drive characteristics have not been overly affected, with the front axle only coming into use when necessary. 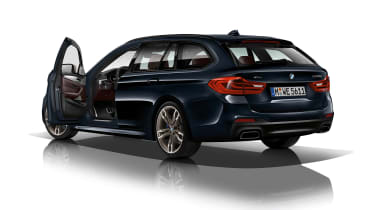 Visually the M550d shares much with other M Performance models, with an updated front facia and liberal use of Cerium Grey highlights for the window surrounds, mirror caps and badging. The overall look is subtle, but still menacing, helping distinguish the M550d from lesser 5-series models, something rivals like the Audi A6 often have trouble with.

Inside, it is 5-series as normal, which is to say it's ergonomically sound and more driver-centric then the Mercedes-Benz E-Class. Yet to be confirmed for the UK market, prices and final specifications are still up in the air, but expect the M550d to bridge the gap between top specification 540i models and the forthcoming M5 if it does eventually hit showrooms here.

BMW has yet to confirm the M550d xDrive for the UK, but will say that although “there are currently no plans to bring it to the UK, it is being discussed.” BMW did offer an M550d version of the previous generation F10 5-series, sharing the tri-turbo diesel engine that currently features in the X5/X6 M50d variants, but didn’t build it in right-hand drive due to the packaging constraints. To go on sale in Germany sometime in June, we will have to wait and see if BMW does the right thing and gives us a go this time.