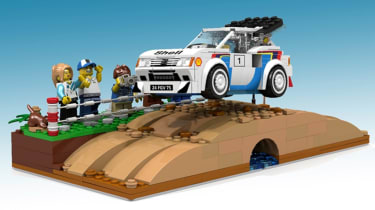 AbFab1974’s designs capture the essence of all that’s great about the rally scene: a car, a jump and wide-eyed spectators. They’ve been created as an addition to LEGO’s existing ‘Speed Champions’ line and there will be plenty of LEGO-loving Rally fans out there who’d love the opportunity to buy them. If you’d like to add your support to the designs, you can do so - click here to support the Lancia Delta, or here for the Peugeot 205.

The first of the two rally car designs features a Peugeot 205 T16, airborne - as all the best rally cars are remembered - and plotting its arching trajectory over a bridged river. The spectators’ immediate proximity depicts the true, up-close nature of the sport, although the lack of mud-splattered faces seems like an opportunity for extra detail missed.

> Click here to read about the new LEGO McLaren 720S 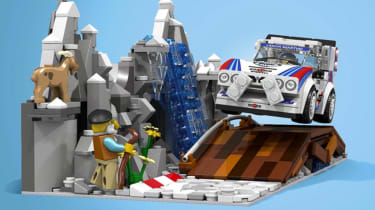 In true Group B style, the LEGO T16 wears a huge, black whale-tail spoiler articulated at forty-five degrees. Present too are the blistered arches, although they don't meld with the body quite as well they do on the real T16! The combination of decals and colouring further accentuates the accuracy of the model with Shell and Michelin stickering all around.

The second design, a Lancia Delta S4, is the car that battled with the T16 over two seasons notching five victories, but ultimately failed to match the Peugeot’s title clinching performances. Once again, the S4 is captured in LEGO careering over a bridge but this time the fantasy rally stage is carved into a snowy mountainside - complete with a shepherd and goat as bystanders.

As with the T16 model, to best replicate the S4’s original proportions the car has been converted to a single seater, placing the LEGO driver centrally behind the Martini liveried bonnet. The frontal, octuple light arrangement and exhaust backbox-exposing rear help lend the LEGO Delta an authentic look.

Neither of the LEGO rally legend designs is available to buy at the moment but that could change if the LEGO gets enough indications of support. Of course, if you can’t wait that long, LEGO already sells a number of LEGO racers to help keep you busy in the meantime. A Mercedes F1 car, 2017 Le Mans winning Ford GT and Audi’s LMP1 R18 e-tron Quattro are all available.