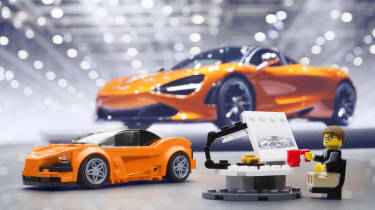 If you can't quite stretch to the £208,600 McLaren asks for a 720S or aren't keen on the new supercar's styling (or perhaps both), then the latest addition to the Lego Speed Champions range might be a better fit.

The Danish toy company has revealed a bijou brick-based variant of the latest British supercar, appropriately hued in McLaren orange and approximating its unique styling for a modest £12.99.

The kit includes all the bricks to build your own model of the 720S, as well as a designer minifigure, design studio desk and some unique accessories - including a drawing board with a 720S design sketch and even a tiny single-stud brick in the shape of a 3D-printed model car.

While Lego's Speed Champions range doesn't quite replicate the forms of a car with perfect accuracy, it's become one of the company's most appealing product lines for petrolheads.

Previous models include the hypercar "holy trinity" of Porsche 918 Spyder, Ferrari LaFerrari and McLaren P1, but other editions have given us brick-based replicas of new and classic Ford GTs, 911s and 488s, Mustang, Camaro and Corvette muscle cars, as well as Grand Prix car and WEC vehicles - as well as a full Ferrari race car transporter.

'Building a model like this gives the next generation of McLaren enthusiasts a taste of just how exhilarating that moment is for designers,' explained McLaren Automotive chief designer Rob Melville, though it should be stated that there are plenty of us significantly older than Lego's recommended 7+ age band who can appreciate its work, too...

The Lego McLaren 720S will be available from June 1, not long after the first production cars reach owners. For more 720S-related dreaming McLaren already has a configurator for the car, and you can read about more about that and the 710bhp supercar itself at the link.