The 2017 Volkswagen Polo is all-new and sports a conservative new look together with a petrol led engine line-up. 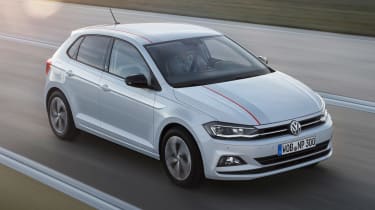 Volkswagen has just launched its all-new Polo, the sixth generation of the accomplished supermini to arrive since the original Polo launched in 1975. Despite the evolutionary looks though, the new Polo represents a significant technological step over the old model with a new platform, engines and interior.

The conservative looks may disappoint some, but the Polo is VW’s biggest seller in the UK so it was unlikely that the formula would change much from the current model. The new body, although similar in shape to the current car, has far crisper lines on closer inspection - with more aggressive contouring and thinner lighting elements.

The new, albeit optional, LED head and tail lights give the Polo a more premium semblance, although the placid shape arguably lacks the dynamism of the closely related new SEAT Ibiza. Speaking of its Spanish cousin, the Polo rides on the same MQB A0 platform - the A0 bit being specific for its use in B-segment hatchbacks. As a result the new Polo shares its 2564mm wheelbase with the SEAT and that has unlocked a useful amount of extra rear passenger and cargo space compared to the mk5 car.

>Click here for more on the all-new Polo GTI

Like most cars of this size, the Polo utilises a simple torsion beam rear suspension set up, so despite VW’s claims of the Polo’s improved handling capability, we suspect the multi-link sprung Mini to still pip it on a winding road. Volkswagen has also made the surprising move of not replacing the three-door version, making the new Polo a five-door only proposition.

Perhaps unsurprisingly, the Polo’s engine line up consists of mostly small turbocharged units, with 1-litre three and 1.5-litre four cylinder options, the power ranging between 64 and 147bhp in standard form. VW’s consistent retraction from its reliance on diesel is also apparent here, with only one diesel engine being offered at launch in two different outputs. Transmission options are 5 and 6-speed manuals, as well as a 7-speed DSG on all but the base engine options.

A GTI model will also be available at launch with the slick yet subtle detailing that always looks so good on a Volkswagen GTI. It will be powered by a 2-litre TSI turbocharged four-cylinder engine boasting 197bhp, a decent jump on the current GTI’s 189bhp 1.8. 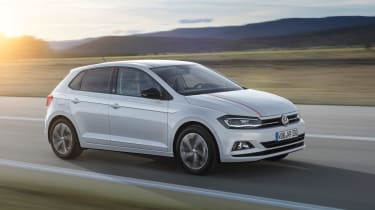 Inside the Polo has taken a slightly larger leap forward, with a fresh new dash layout housing the infotainment screen higher up and further towards the driver’s eyeline. Depending on variant and specification, buyers will be able to specify the dashboard in a range of colours and finishes, while a new 6.5-inch infotainment system is now standard on all bar the entry-level Trendline model.  VW’s latest 8-inch Discover Pro system is also available as an option, as is a new version of VW’s active information display, with new graphics and software.

Prices are set to closely follow those of the current Polo, which currently sits between £12 and £20k, but with an all-new Ford Fiesta and the impressive new SEAT Ibiza to contend with, Volkswagen has anything but the market to itself. 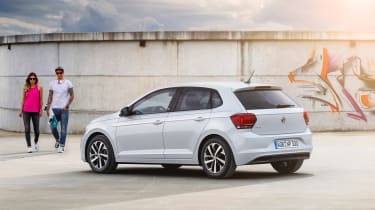