Ford Ranger 'Raptor' spied - and it could come to the UK

High-performance, petrol-powered Ranger could be coming to the UK in 2019 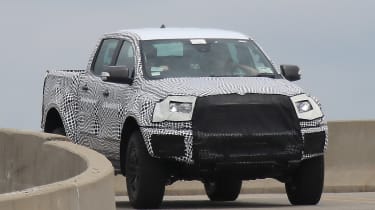 Have you ever been tempted by a Ford F-150 Raptor from the States, but are scared off by the sheer size of it? Well, Ford has been caught testing a pumped up, aggressive new version on its more euro-friendly Ranger pickup in the US; and it could be coming to the UK.

A tuned, Baja ready pick-up may not seem to be the most evo car in the world, but that is not to say it won’t be interesting. The standard Ranger pick up is actually designed and engineered in Australia, and with the intention of picking up on some of the success the F-150 Raptor has had in the US, Ford intends on offering the same type of experience in a smaller package. 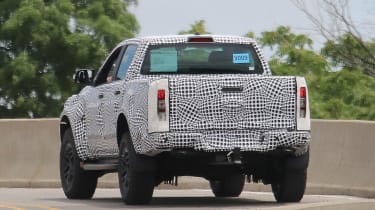 Spotted testing in right-hand drive form, the Ranger ‘Raptor’ is rumoured to be sporting a modified version of the turbocharged 2.7 V6 Ecoboost petrol engine from the standard F-150, as well as aggressive bodywork and a pumped up ride height.

The model is currently undergoing parallel development in both the US and Australia, and could include the 10-speed automatic gearbox and high specification internal bypass dampers that make the F-150 so capable in the rough. The extent of the internal engineering project does point towards a major overhaul, something reflected in the fact Ford has spent so much energy engineering a whole new power plant to fit the package.

> Click here for our review of the Mercedes-AMG G63 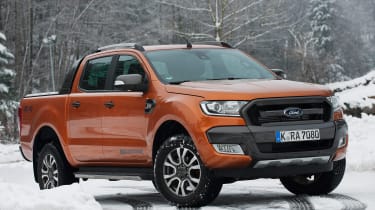 The prototype also confirms a few new details, including wider bodywork, shorn front and rear overhangs and the same 17-inch wheels you find on the larger F-150 Raptor. On the F-150, the Raptor runs a set of bespoke BF Goodridge all-terrain tyres measuring a massive 315 section wide, but judging by the spy shots, it is unlikely they will be quite that size on the smaller Ranger.

A broader grill is also present and should more closely mimic the F-150, on top of a suite of changes to the styling; this will be especially likely now, as the Ranger will soon be sold in the US. The interior will also be receiving a bit of TLC; something needed in order to justify the higher price tag. 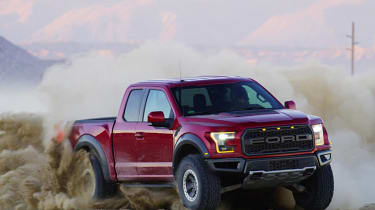 The notion of an extreme pick up has never really been experimented with here in the UK by a mainstream manufacturer. Aftermarket companies like Arctic trucks have their niche customer, but Ford’s attempt of using a high performance pick up to act as another type of halo product could well inspire a whole new type of fan here in the UK.

The limiting factor could well be the lack of a diesel option though; without one the Raptor might well become a non-starter in the diesel-dominated pick up arena. A rebuttal to that argument though lies in cars like the Mercedes-AMG G63.

Clearly owned by those with the ability to afford the running costs, a Ford Ranger Raptor might just find its own unique audience away from the customer who would buy it for practical purposes and instead towards those who are more interested about the image.