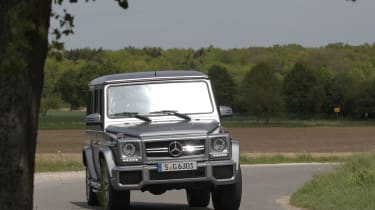 The most powerful Mercedes G-Class (aka G-Wagen) up to now has been the 507bhp G55 AMG, but a new generation of G (with a new interior package and styling updates) includes a pair of new AMG models; this slightly warped 537bhp G63 and the frankly psychopathic G65, a twin-turbo V12 monster with 612bhp, LHD only, limited production and a price tag of 264,000 euros (!) in Germany.

The G63 driven here will be available in both LHD and RHD when it goes on sale in June and is equipped with the twin-turbo 5461cc V8 recently introduced in a range of AMG cars, including the SL63 we drove last week. The G63 also comes with the latest version of the excellent 7G-tronic automatic transmission featuring ECO stop/start function as standard. Fortunately, that’s the only nod towards the eco-warriors you’ll find on the G63, as the rest of the specification is just as bonkers as ever.What’s it like to drive?

This is where it gets interesting because driving the G63 down a challenging road is pure comedy. The combination of live axles front and rear and a ladder chassis, with all the rigidity of balsa wood means the G63 is constantly being reined in by the omnipresent ESP stability control that refuses to turn off.

The G63’s understeer is of epic proportions (even at relatively low speeds) so the only way to make decent progress is to rely on the G63’s shocking turn of speed down the straights and then slow right down for the corners.

Driven this way, the G63 can be huge fun, dispatching the 0-60mph sprint in just 5.4 seconds and then bumping into its 210kmh (130mph) speed limiter with spectacular ease on the delimited section of German Autobahn we visited.

The steering feel is non-existent and seems heavy on first acquaintance but at least the revised brakes (with fetching red calipers) seem up to the challenge of keeping this 2550kg monster in check.

'What with' is the issue here. Its list price of 137,504 euros in Germany (no UK price has been announced yet, but that equates to around £110K) puts it ahead of far more accomplished cars like the Porsche Cayenne Turbo but the appeal of the G-Class is that it’s not a conventional SUV; Mercedes calls it a 'performance off-roader', and says it's better viewed as an extremely posh Land Rover Defender rival. I’m not so sure about that but the G-Class has gained a real following around the world, with sales increasing significantly recently, to the point where Mercedes has had to introduce double shifts (from next month) in an effort to keep up with demand. Anything else I need to know?

Mercedes says fuel economy has been improved by 13 per cent but when you’re only averaging 13mpg (as we did during this two-day test) it’s hard to notice. Still, you’re kept thoroughly entertained by the fabulous V8 rumble emitted by the twin pipes poking out from under the running boards (just ahead of the rear wheels) and this just about makes up for the financial pain you suffer each time you go to fill it up.

But for me, the biggest highlight is that the G63 still exists, because this car has survived two attempts by Mercedes management to kill it off, yet it’s here some 33 years after the first G-Wagen rolled off the production line in Graz, Austria.

That Mercedes is producing cars as truly bonkers as the G63 and G65 in this age of sensibility is something all car enthusiasts should celebrate.