Volvo to phase out conventional engines from 2019

Volvo and Polestar to exclusively sell electrified vehicles from 2019 onwards. 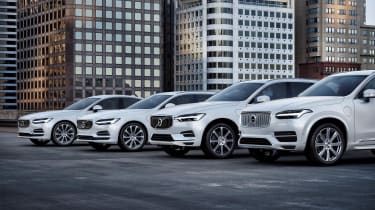 Volvo has already been through quite a transformative period under its Chinese owners Geely, but the Swedish marque’s impressive new products and news of Polestar’s severance from the Volvo brand pale into insignificance compared to the latest revelation to come out of Gothenburg. Volvo has announced that it is phasing out the pure internal combustion engine and instead will only offer electric and hybrid models from 2019.

The new strategy, announced by Volvo CEO Hakan Samuelsson, will consist of a three-prong approach to the level of electrification future Volvo (and Polestar) models will offer. Volvo will not drop the internal combustion engine entirely, but will instead use it as a technological stopgap rather than core drivetrain component.

Volvo has made a pretty big announcement regarding its future in electric vehicles, click on the link for our breakdown...

All of these technologies will work with Volvo’s SPA and CMA architectures, meaning that all levels of electrification will be able to be spread across all of Volvo's product lines. Volvo has set a bold target of reaching 1 million twin-engine and Pure EV cars on the road by 2025.

As the first ‘premium’ manufacturer to commit to complete electrification, Volvo continues to forge ahead with its development push to not just be a contender in the premium field, but a leader in the transformation of the industry. 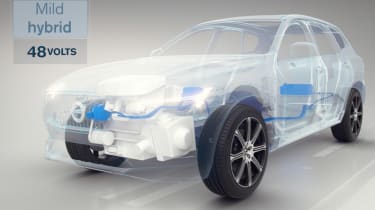 The first level of Volvo’s electrification is the adoption of a 48V electrical system creating a ‘mild hybrid’ across the entire portfolio. The Volkswagen group was the first to introduce the technology on the Audi SQ7 where it powers performance-orientated components like an electric compressor that feeds the turbos at low rpm. This works in conjunction with standard 12V electronics, which still feed off a battery and power the normal ancillaries like the starter motor and infotainment systems.

Volvo has confirmed that they will follow the same route as VW, still fitting the 48V system alongside a standard 12V system. This 48V system will be connected to an electric motor and generator, taking the place of a traditional starter motor and also act as a generator to replenish the battery during driving. Volvo mentions that this technology should reap benefits in fuel consumption, giving 'diesel like' economy figures for petrol derivitives.

> Click here for our review of the Audi SQ7 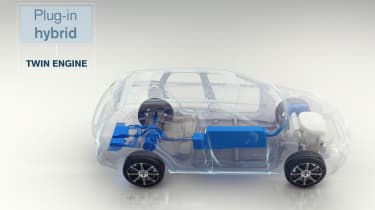 Currently, Volvo offers a T8 twin-engine set up on most large models, combining a 2-litre petrol engine with a battery pack and rear-axle mounted electric motor. The result is an electric range limited to around 15 miles depending on the model, but for the smaller models, Volvo will be increasing the reliance on the electric side, with three-cylinder I.C engines working on a smaller Compact Modular Architecture. Volvo has refused to confirm whether its plug-in options will spread across to both petrol and diesel.

Volvo sights an increase in performance as one of the main advantages of the twin-engine system, so we also expect this to play a large role in Polestar’s future product roll out. 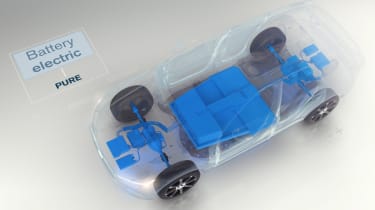 This will be Volvo’s biggest expansion, as both SPA and CMA platforms support the integration of pure EV drivetrains. Volvo has confirmed that it will be launching five full-electric models between 2019 and 2021, three of which will be badged as Volvos and interestingly, the other two as Polestars.

What form these EVs will take we don’t yet know, but with Polestar's crosshairs aimed at performance brands like AMG and Audi Sport, Volvo's performance reputation could be about to get a lot more serious.

What does this mean for us?

The notion of a mainstream electrified sports car might not get petrolheads over excited, but without a specific performance car heritage to soil, Volvo and Polestar might just be the perfect vehicle, no pun intended, to test the waters.

Sure, we will miss the raw five-cylinder burble that hot Volvos used to possess, but we have already faced its demise, which would have happened regardless of Volvo’s electric push. Performance car fans face an uncertain time ahead as manufacturers experiment with new technology and powertrains, but the fact that they are trying at all is a good sign for the future of the performance car.