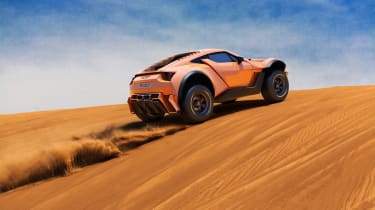 This jacked-up coupe-SUV hybrid is the Zarooq Sandracer 500GT. You may not recognise the Zarooq name – we certainly didn’t – but it’s apparently the only manufacturer ever to assemble a production car within the United Arab Emirates.

The name ‘Zarooq’ also means ‘Sandracer’, apparently – making this the Sandracer Sandracer 500GT. Catchy. It's now been revealed in full production form, after making an outing at the Abu Dhabi Grand Prix in 2015 during the concept stages.

If you’re in the market for a supercar to take off the beaten track, your options are fairly limited. You can plump for a hyper-SUV, like the Range Rover Sport SVR or Mercedes-AMG G 63. If you’re willing to hang around, you could wait for an upcoming model from a supercar manufacturer like the Aston Martin DBX or Lamborghini Urus. Or, you could forget the ‘car’ part of supercar and buy yourself an Ariel Nomad. 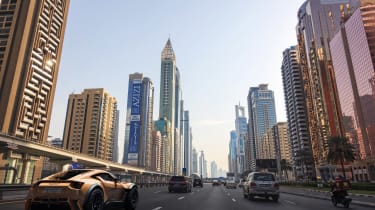 Zarooq is attempting to plug this gap in the market with the Sandracer 500GT, a car that's likely to appeal most to its domstic buyers. It appeals to UAE-based customers on two fronts – with the desire to show-off in something exotic and exclusive catered for, as well as the need to hoon around on the endless sand dunes the country has to offer.

To that end, the Sandracer 500GT shares plenty with classic European supercars. It’s based on a mid-engined, two-seat coupe body and built entirely of carbon fibre. The bodywork is built in Belgium, while the luxurious hand-stitched leather interior is made by Mansory in Germany.

The engine, too, is standard supercar fare; it’s a 6.2-litre V8 with 518bhp and 487lb ft of torque. It’s mated to a five-speed sequential gearbox. Combined with the car’s light weight (Zarooq claims 1200kg), that should provide pretty impressive performance – though exact figures have not been provided. 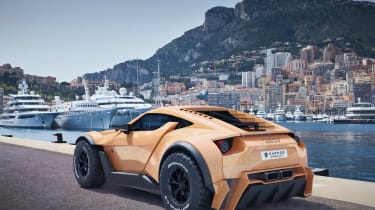 The leather-trimmed interior is as you might expect, too – packed with all the technology a millionaire supercar owner would want. A digital dashboard with Apple Carplay-compatible infotainment mates with bespoke carbon fibre seats and a carbon fibre steering wheel. There’s even climate control, vital in the desert where the Sandracer will spend most of its time.

The real magic is underneath, though. Zarooq has given the Sandracer a sophisticated, Dakar-spec suspension system, with two settings for road and sand. In the latter setting, suspension travel is an incredible 45cm, which, mated with chunky tyres and the lightweight body, should give the Sandracer pretty unparalleled performance on sandy terrain – exactly as you’d hope, given the name. 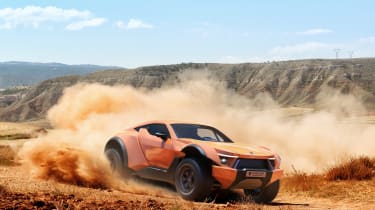 “… we combined what is usually impossible: the quality and performance of a racing car with the practicality and durability expected from a road-homologated supercar which can be used as a day-to-day vehicle”, said Phillippe Gautheron, Chief Engineer of Campos (who provided the Sandracer’s roll cage and chassis). “Zarooq Motors makes supercars that are unique since you can take them on a week-end track day or for a luxurious commute in the city but also on any off-road terrain, even the toughest dunes of the Arabian Desert where they were born.” said Mohammed Al Qadi, Zarooq Motors' executive.

The Zarooq Sandracer 500GT is currently limited to 35 examples, which are selling for a starting price of $450,000 (around £350,000) in the UAE. Zarooq says clients are mainly VIPs and car collectors, based both in Europe and the GCC region. The first models are set to be delivered by the end of this year.