New Lamborghini Urus SUV revealed in full – due in 2018 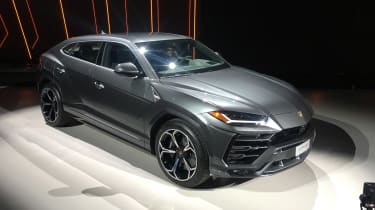 After endless rumors, multiple teasers, a few leaked images and a full-on concept car Lamborghini’s new SUV, the Urus, has finally been unveiled. As well as taking the covers off its new production 4x4, Lamborghini has released a full technical breakdown of the car including its 641bhp power figure, a top speed of 189mph and a 0-62mph acceleration time of just 3.6sec. Final prices haven’t been confirmed but the Lamborghini Urus is expected to cost approximately the same as Lamborghini’s junior supercar, the Huracan when it goes on sale in the UK.

The Urus’s astonishing performance is thanks to its twin-turbocharged 4-litre V8. It’s the same engine that’s found in other cars in the VW Group, including the Porsche Panamera Turbo and Cayenne Turbo. Rather than ‘just’ 542bhp and 568lb ft, like the engine makes in the Cayenne, the Urus has 641bhp and 627lb ft. Such vast figures help counter the car’s kerb weight of just less than 2200kg and make it capable of achieving supercar-like acceleration of 3.6sec to 62mph – that’s 0.1sec faster than the Lamborghini Gallardo LP560-4. Such performance figures have encouraged Lamborghini to categorise the Urus as a ‘Super SUV’ and to underline that performance focus, the Urus comes with carbon-ceramic brake discs as standard; 440mm diameter fronts with ten-piston calipers and 370mm rears with six-piston calipers.

> Read our first drive in the Lamborghini Urus here...

The engine isn’t the only similarity to the Porsche Cayenne Turbo, the Urus also uses the same three-chamber air suspension that can alter ride-height and spring rate. It also shares an eight-speed automatic gearbox, a torque vectoring rear differential, electromechanical variable rate anti-roll bars and a rear-wheel steering system.

Despite the Urus having much of the same hardware as other large VW Group SUVs, all are designed to allow the individual attitudes of each manufacturer to be reflected in each car’s calibration and final set up. Maurizio Reggiani, Lamborghini’s chief technical officer, makes it clear the Urus will feel distinctive: ‘It’s clear that we’ve used some synergy of components that come from the group, like we did in the past. What makes the difference is the software, the calibration is all the job of development that we did here in Sant’Agata. Our car is completely different from all the others.’

But there’s a reason why so many SUVs in the VW Group use a lot of the same components, and that’s because they’re so useful in combatting the negative aspects of a high riding SUV, as Reggiani clarifies: ‘In terms of weight, we are in the range of 2.1 to 2.2 tonnes. But it’s also the fact that we prefer to put in some kilos more in order to have rear wheel steer because this is able to compensate. In the end, some technical solutions were able to compensate for more of the weight that we add in. This is a job from an engineering point of view, it must be done continuously [throughout development] to be able to define the right set up of the car.’ 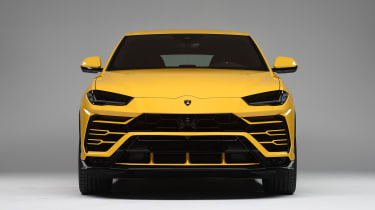 The Urus’s attitude and behavior can be altered further by the driver with six modes in the car’s ANIMA (Adaptive Network Intelligent Management) system. Each setting recalibrates the SUV's engine mapping, suspension and traction management systems to help it adapt to different situations. Strada, Sport and Corsa are found on all current Lamborghinis, but there is trio of all-new off road modes for the Urus: Terra, Neve and Sabbia – or land, snow and sand. There’s a final ‘Ego’ mode that allows the driver to select their own steering, engine and suspension combination. Rather than a button on the steering wheel, the Urus’s ANIMA controls are located on a barrel-like device with small aircraft-style levers called the tamburo in the centre console.

Although four-wheel drive, rear-wheel steering and even off-road vehicles are nothing new for Lamborghini, turbocharged engines and automatic gearboxes are. Consequently it has been challenging for the engineers to be able to transfer the Lamborghini spirit into the Urus, but the engineers are satisfied they’ve instilled the SUV with the right attitude. 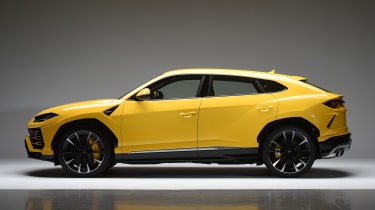 Reggiani, explains in detail which Lamborghini elements have been maintained: ‘The most important parameter is the DNA, it’s related to the performance, what you feel when you sit in the car, the emotion. The sound, vibration and the connection between you and the road. How it moves when you steer, the accelerator, the brake and the way that you perceive the road. You have too much filter, normally [in an SUV] – it’s too artificial. When you are in a super SUV you get the perception of super sports car.’

Reggiani went into detail about the engine choice, too: ‘When we made a product profile, we recognised that talking about an SUV – a car that must be able to go offroad, or go in a situation where you have asphalt that’s not flat – it was more and more fundamental to have high level of torque at low rpm. Otherwise you cannot climb, you cannot go on the sand. For this reason, the only physical dynamic machine that can release high level of torque at low rpm is the turbo engine.’ The need for the Urus to be capable off road also dictated the need for the automatic gearbox.

The exterior – despite the car’s height and its five doors – is still undeniably Lamborghini. There’s the same Y-graphic in its headlights as its supercar siblings, only it’s been flipped horizontally for the Urus. There’s also the sharp angles and creases that adorn the Huracan and Aventador all over Urus’s bodywork – there isn’t a square foot that isn’t broken up by converging lines or an abrupt crease. It’s far from subtle, as a Lamborghini should be. 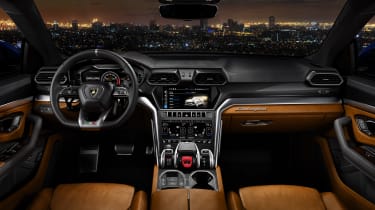 The car’s final appearance, though, isn’t a huge surprise as it isn’t far from that of the Urus concept of 2012. It even has some ludicrously large wheels like a concept car – the smallest are 21-inch in diameter going up to optional 23-inch items. The exterior is bulkier than the show car’s, but surprisingly, it looks lower and even more aggressive. An optional off-road package – with less prominent lower front and rear bumpers for better ramp and departure angles – is available and helps the production car look a little more like the original concept.

Sadly, as well as the plethora of features and lines, the separate arches (that can be painted to match the body or in a contrasting colour), stuck-on rear wing and fussy lower body trim mean that the Urus’s design doesn’t quite have the same homogeny and crafted detail as other Lamborghinis.

That’s in contrast to the interior, because unlike the hastily incorporated Audi infotainment and user interface in the Huracan, the Urus’s cabin looks far more considered and cohesive. There’s a pair of screens in the centre console that sit above the starter button with its trademark Lamborghini flip-up red cover and the new tamburo where you select the driving modes. Yes, there’s some not very well disguised Audi switches and stalks, but rather than looking like an afterthought they’re well integrated. 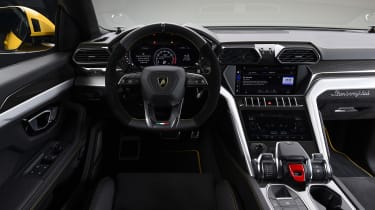 The unprecedented success that other sports and luxury brands have had with their SUVs – Porsche’s Cayenne and Macan, Audi’s Q range etc – has encouraged Lamborghini to turn the Urus from concept car into reality. And even helped it forget about the struggle it had in selling its first off-roader, the LM002 in the late eighties and early nineties. Lamborghini is convinced the Urus will be a success, and expects it to make up 50 per cent of all Lamborghini sales by 2019.

To help accommodate the boost in sales the Sant Agata factory has been expanded with a new paint building and an assembly facility just for the Urus that can pump out 20 cars per day. Lamborghini is also expanding its dealer network and updating its current showrooms to help it not just sell the Urus but help service and maintain the cars more effectively.

A new approach will have to be taken in the dealerships because it’s unlikely that buyers will use the SUV in the same way as owners of other Lamborghinis.  Annual mileage is expected to be around 10,000 to 15,000 miles, much higher than that of the average Huracan and Aventador.

The added revenue from the Urus will hopefully fund the continued and greater investment in the company’s line of supercars and hypercars, much in the same way the Cayenne has done for Porsche’s sports cars. But rather than just funding them, the development of the Urus will aid Lamborghini’s other cars from a technical perspective says Reggiani: ‘We now have more and more experience in an active anti roll bar – that is really an important revolution. We know the potential and looking at the potential will be our job for future cars, to see what’s possible to take from the Urus. I think there are also some other points that are really cool, and we will also see those in super sports cars.’

Much to the joy of purists and fans of Lamborghini’s current range, what we won’t see anytime soon is its sports cars with turbocharged engines. ‘When it’s possible, we will stay with naturally aspirated. In a super sports car, this is part of the DNA. Sometimes you must be proud of what you are able to do. We continue to be proud of our V10, V12 naturally aspirated engines,’ said Reggiani.