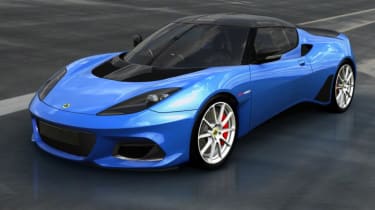 You see, unlike the GT430 which has every surface dressed in a carbonfibre aerodynamic device, the Sport is stripped naked of the aggressive aero, reverting to the more simple, cleaner lines of the original Evora 400.

Carbonfibre is still used extensively throughout the construction of the GT430 Sport, with the front and rear bumpers, front access panel, roof panel, rear quarters and the one-piece louvered tailgate along with its integrated spoiler all manufactured from the magical weave. It also retains the larger carbonfibre front ducts and integrated air blades from the GT430, with the front arches also optimised for aerodynamic effect. Despite forgoing the aero of the GT430, the Sport still generates 100kg at 196mph (the GT430 manages 250kg at its 190mph maximum). 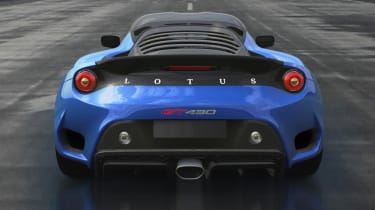 Inside you’ll be hard-pressed to tell a GT430 Sport from a GT430, with plenty of carbonfibre on show, a pair of carbon race seats, door sills and a lightweight instrument binnacle manufactured from the material, too.

Performance of the GT430 Sport is on a par with the GT430, with a claimed 0-60mph time of a 3.7sec, or 3.6sec if you go for the new automatic gearbox which is available on both models, the pair reaching 100mph in under eight seconds.

Both GT430 models are fitted with a 3.5-litre supercharged V6, the resulting 430bhp making these the most powerful road-going Lotus models to date. That engine is mated to either the aforementioned six-speed manual gearbox, or a six-speed auto, the latter available from January 2018. The manual features a lightweight single-mass flywheel for a freer and quicker revving engine and the fastest possible changes.

Being a Lotus light weight is paramount to these two Evora models, with the GT430 tipping the scales at 1258kg dry, the 430 Sport 1248kg. The auto box adds 11kg but does allow the engine to produce a further 7lb ft of torque taking the peak to 335lb ft over the manual’s 325. 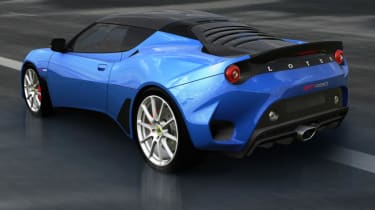 The additional downforce of the GT430 comes courtesy of a slew of carbonfibre upgrades and additions to the bodywork. A carbon splitter, rear diffuser and adjustable rear wing all feature, while air blades and louvres sit above the front wheels to reduce turbulence inside the wheel arch. At the rear, there are also aero ducts behind each wheel, reducing pressure – as well as allowing passers-by a better look at the standard-fit Michelin Pilot Sport Cup 2 tyres.

These aero additions add 9kg to the GT430’s body, but by making much of the body from carbonfibre Lotus has cut overall weight by 26kg compared to the already-featherweight Sport 410. And what’s carbonfibre if you can’t show it off? Lotus has very wisely ensured that plenty of exposed-weave carbon is on display across the body, in both bumpers as well as the roof, rear wing, and one-piece carbon tailgate.

The lightweight body is backed up with Lotus-tuned Ohlins dampers, ultra-lightweight Eibach springs and a Torsen limited-slip differential.

The end package looks quite remarkable. Lotus claims that on its own Hethel test track, the GT430 posted a lap time of 1min 25.8sec – as fast as the super-lightweight, track-focused 3-Eleven.