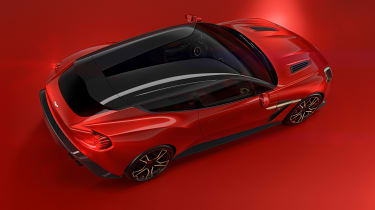 Originally revealed at this year’s Monterey Car Week, Aston Martin has just revealed more detailed images of the Vanquish Zagato Shooting Brake, bringing the range of Zagato-bodied Vanquishes to a total of four along with the Coupe, Volante and Speedster.

With the original Vanquish Zagato coupe unveiled at Villa d’Este last year, followed by the Volante version during Monterey week later in 2016, the announcement of this year’s duo brings the Zagato ‘range’ to four for a total production of 325 cars. The production Zagato Volante is also making its debut at this year’s event.

Just 99 Shooting Brakes will be made, along with 28 Speedsters, the former number matching the production run of both coupes and Volantes respectively. The Volante – currently in production and due to continue into 2018 – and the Speedster have already sold out, although there’s no official confirmation as to how much any of the Zagatos cost. 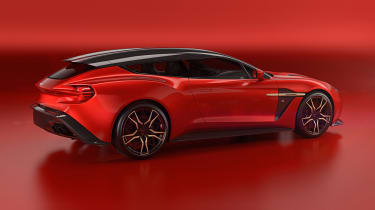 As with the Coupe and Volante models, the Speedster and Shooting Brake are based on the Vanquish S production car, with its 592bhp V12 and Touchtronic III automatic gearbox. Aston Martin says the variable damping has been fine-tuned for each model, and all Zagatos feature a body made completely from carbonfibre. The Speedster has aerodynamic fairings behind both seats, while the Shooting Brake – still strictly a two-seater – has a powered tailgate that closes over the matching tailored luggage set. Inside there is, and we quote, “Dramatic herringbone carbonfibre facia with anodised bronze rotary controls, extensive ‘Z’ motif quilting and the option of a fully aniline leather upholstery”.

Aston Martin Chief Creative Officer, Marek Reichman, said of the Vanquish Zagato family: “We haven’t released Zagato models as a family before, at least not in this way, but the idea is not without precedent. Think back to the DB7 Zagato and DB AR1, or the V8 Zagato Coupe and Volante, for example. We’ve simply taken things a few steps further.”

While the original Zagato/Aston Martin collaboration in the 1960s was about creating a competitive racing car, the reality for these modern era Zagatos is a life spent parked in de-humidified garages and on finely-cut lawns, rather than in a racing paddock.