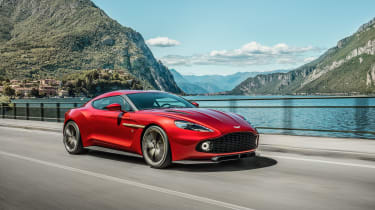 The Aston Martin Vanquish Zagato was originally unveiled as a concept at the Concorso d'Eleganza Villa d'Este, but now, as predicted, is to be built in limited series production form.

Just 99 of the Vanquish Zagato coupe will be built, each at Aston Martin's Gaydon factory. The car uses the same 6-litre V12 engine as the standard Vanquish, but power is now up from 568bhp to 591bhp. Aston Martin predicts a 0-60mph time of 3.5 seconds. 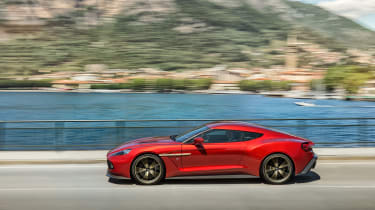 The Zagato also features a tweaked suspension setup which Aston Martin claims provides a 'true dynamic driving experience'. That remains to be seen, but the 2012 V12 Vantage Zagato definitely didn't disappoint in the way it drove.

Really though, the core of what a Zagato is about is in the way it looks. For the Vanquish, extensive use of carbon fibre means that split lines can be reduced, replaced instead with large single-piece panels.

The LED tail-lights echo those of the Vulcan track car, albeit with a nod to the original Zagato road cars. The wing mirrors reference the One-77 hypercar while the entire rear of the car appears not unlike the soon to be launched DB11. Also worth noting are the quad exhaust tips. 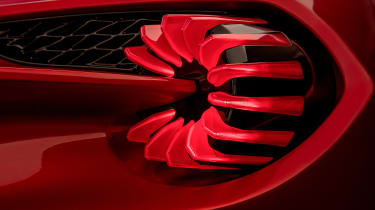 The roof of the Vanquish Zagato takes the trademark double-bubble roof and incorporates it into the rear window glass. Inside, Aston Martin has produced 'Herringbone' carbon fibre, which is then combined with anodized bronze and leather, the latter of which has the Zagato 'Z' stitched into its quilt pattern.

Aston Martin says customer deliveries will start in the first quarter of 2017.