Abt Sportsline creates surrogate S1 with its 236bhp Audi A1

Yearning for a new Audi S1? Abt Sportsline has worked its magic on the current range-topping 40 TFSI A1 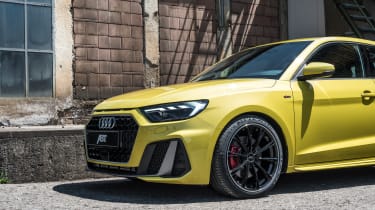 Much to the dismay of hot hatch lovers, Audi is yet to give the new A1 its S treatment, but fear not, as German tuner Abt Sportsline has turned its hand to the current range-topping 40 TFSI model, giving it more power than the old S1.

Under the bonnet is the ubiquitous EA888 turbocharged 2-litre four-cylinder, a powerplant you’ll find in most Volkswagen Group hot hatches of today, and one that has proven to take to modifications with ease. This strong engine gives tuners such as Abt the ability to plug in a laptop and extract a decent lump of power without the need for additional, costly hardware.

The brand has added 39bhp and 29lb ft of torque to the stock figures of 197bhp and 236lb ft, resulting in new peaks of 236bhp and 265lb ft – pretty much halfway between the outputs of the Mk7.5 Volkswagen Golf GTI in (discontinued) regular and (still available) Performance forms. Performance figures for Abt’s A1 haven’t been quoted, but we’d imagine you’ll see a few tenths knocked off the model’s factory 6.5sec 0-62mph time; top speed will likely remain at around 150mph. 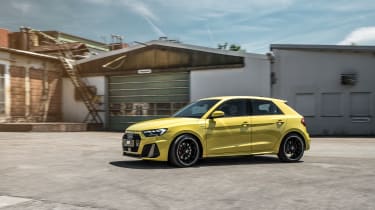 Elsewhere, you’ll notice a few subtle tweaks to the exterior of the car, including the addition of new 18-inch, gloss black Abt Sport GR wheels wrapped in 215-section tyres. Adding an element of aggression are the Abt suspension springs, which lower the ride height by 25-30mm and are available in combination with the factory sports suspension or electronic damper control system.

This isn't the only A1 project the German tuner is working on, as it's also creating a one-off show piece set for reveal at the end of October. The model is likely to boast even more power, and a full bespoke carbonfibre body referencing Audi icons of years gone by.

Abt’s modifications all come with a warranty, and the company says its engine tweaks have been extensively tested to ensure longevity. Pricing hasn’t yet been detailed.