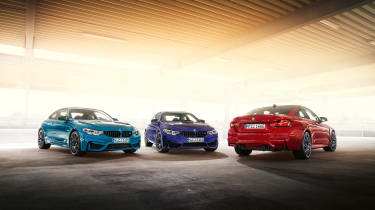 BMW’s M division has offered numerous special-edition versions of its cars over the years, with recent examples including the 30 Jahre Edition M3, the track-inspired M4 DTM and the 493bhp M4 GTS. Now, with the unveiling of the next-generation M4 imminent, the Munich brand has revealed the Edition M Heritage range, a trio of current-generation M4s, each finished in one of three exclusive colours.

The most notable changes for these models are said colours, which reference the brand’s blue-blue-red stripe: Laguna Seca Blue, Velvet Blue metallic and Imola Red. Also present are the same 20-inch forged wheels you’ll find on the Competition Package variant, but here in an exclusive matt Orbit Grey finish. The carbonfibre roof, meanwhile, features an embedded M stripe to further set it apart from.

Inside, seat colours change depending on the exterior hue, with various leather and contrast stitching combinations on offer. To further hammer the message home, interior carbonfibre inserts also sport integrated M colouring, while embroidered Heritage Edition emblems are emblazoned on the headrests, and a plaque on the door sills denotes each car’s one-of-750 status. 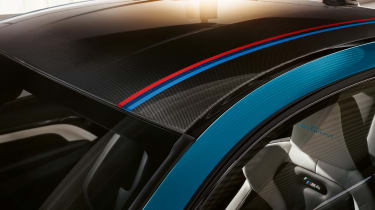 Under the bonnet sits BMW’s 3-litre turbocharged S55 straight-six, putting 444bhp and 406lb ft of torque to the rear wheels to match the M4 Competition Package. The 0-62mph sprint should take the same 4.3sec, with top speed remaining at an electronically limited 155mph.

Pricing hasn’t yet been revealed. However, just 750 will be sold worldwide between November this year and April 2020. The model will make its world premiere at the Nürburgring in mid September.