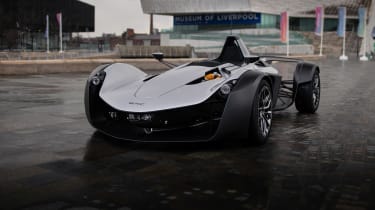 Hot on the heels of the new BAC (Briggs Automotive Company) Mono R that was unveiled at last year’s Goodwood Festival of Speed comes the new Mono, replacing the original version that’s been with us since 2011. The new car follows the same formula of offering supercar slaying performance in a fully road-legal single seater environment.

While the new Mono might look familiar – it sports the same design DNA as the more expensive and limited production Mono R – under the skin it’s an all new design which aims to provide owners with the purest driving experience money can buy. For the first time BAC has opted to go with a turbocharged engine, a 2.3-litre four-cylinder unit developed by Mountune that offers 332bhp and 295lb ft of torque. With a kerb weight of just 570kg its power to weight ratio is a staggering 582bhp per tonne. Performance is brisk to say the least – 0-60mph takes a scant 2.7sec while its top speed is 170mph. 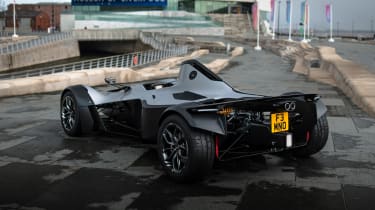 The previous generation Mono developed an already healthy 305bhp from its naturally aspirated engine but the switch to a turbocharged unit ensures the Mono meets the latest EU6D emissions regulations making it fully road legal across the continent and beyond. At the same time BAC says it has worked hard to ensure the turbocharged engine delivers its power in a progressive way to work in harmony with BAC’s driving DNA.

Just about the only major component brought over from the Mono R is its carbon floor and BAC has rigorously pursued a program of weight saving by using innovative technologies. The wheels were produced through generative-design (a form of artificial intelligence that uses cloud computing) which offers a weight saving of 35 per cent over the previous items and they now weigh in at just 2.2kg per wheel. The body panels are graphene-enhanced carbon which makes them stronger and lighter while over 40 3D printed components also shave weight as do revised AP Racing brakes. Despite having a heavier engine the Mono is 10kg lighter than its predecessor. 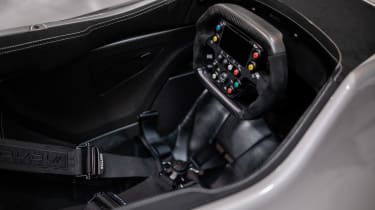 To further enhance the already impressive handling BAC has lowered the Mono’s centre of gravity and improved weight distribution by relocating the fuel tank and the battery. Suspension geometry has been optimised to reduce pitch under braking, with increased anti-dive at the front and anti-squat at the rear maximising traction. Dampers are two-way adjustable items from Öhlins.

BAC says it has reduced braking distances and weight transfer, which helps to deliver sharper turn-in, provide better rotation at the apex and better traction out of corners – aided by specially homologated Pirelli Trofeo R tyres being fitted as standard on all new Mono models. 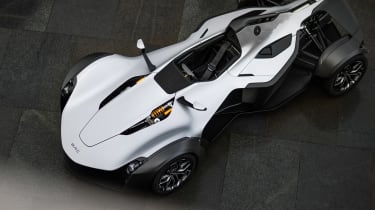 While there’s a strong family resemblance to the original Mono the new model is more closely aligned with the limited edition Mono R. BAC took a new approach to body engineering with all surfaces designed from scratch to reduce visual mass across the body and achieve a more organic, lighter look. The new shark-nose look also reduces the frontal area and improves aerodynamics. A 20mm reduction in height and a 25mm increase in length also go some way to achieving the new model’s more cohesive look.

The front wheel arches are now more aerodynamically efficient while the wider sidepods increase cooling and the larger rear spoiler adds additional downforce. The centrally mounted headlights remain – a distinguishing feature of the previous Mono – while at the back there are new LED rear lights, a new rear crash box and a narrower look to the car.

Inside it remains as minimal and driver-focused as before although weight has been shaved from the steering wheel in the quest for that lower kerb weight. BAC offers several personalisation possibilities along with optional carbon side panels.

The order books for the new Mono are open now with prices starting at £165,950.