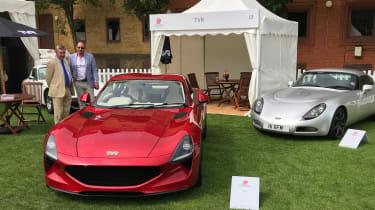 On Thursday 7 June, the gates of the Honourable Artillery Company gardens opened to the 2018 City of London Concours, a show evo, along with its sister title Octane Magazine, is hosting in the centre of London.

As visitors walked down the steps onto the five-acre lawn the first of 125 cars they were met by was an immaculate Lancia Delta Integrale. Finished in white, with white wheels and Martini stripes, it looked as if it was only a set of numbers short of being ready to take on the Col de Turini. But don’t think this show was just for homologation rally specials, far from it.

Next to the Integrale sat a pre-War Bentley, two cars that would rarely be seen together, but still looked perfectly at home with one another in the HAC gardens. In every corner of the inner city garden there were pairs of cars demonstrating the huge variation of metal the show had to offer. An Austin A35 van was just metres away from a Porsche 996 GT3 RS, a Lancia Aurelia sat face-to-face with the new Ford GT, while the shadow of a Lamborghini Murcielago’s scissor doors loomed over a BMW 2002.

It goes without saying that most cars were finished to an incredible standard, this was a concours after all. The majority of vehicles were free from dust, scratches and perished rubber seals, but one or two cars showed signs they weren’t merely for show. A 1932 Lagonda was still wearing the mud from its last adventure and a group of race cars – a Ferrari F40 LM, two Lotus Esprit GT2s, a TVR Tuscan and a Aston Martin DB9 – from the Global Endurance Legends series all wore their battle scars with pride.

The sheer diversity of cars on show was made greater by evo’s Supercar Paddock, an area for mostly brand-new cars to balance out the plethora of older machines. In our collection the aforementioned Ford GT was joined by two McLarens (a 720S and 570S), a Porsche 911 GT2 RS (991.2), a Mercedes-AMG GT R, a Lotus Exige 430 Cup, the new Aston Martin Vantage and, something a little older, a Ruf BTR. 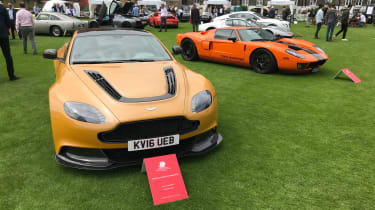 The City of London Concours isn’t just a show, however. The cars were split into six categories and a collection of judges, including evo’s editor Stuart Gallagher and Octane’s editor James Elliot, evaluated each entrant to find a winner for every class as well as an overall champion. The Superfast category, sponsored by evo, was won by a 2003 Lamborghini Murcielago and a 1961 Ferrari 250GT SWB took Octane’s Hyperfast group. The Best In Show award went to the winner of the Very Fast class, a 1911 Fiat S76, better known as ‘The Beast of Turin’.

The other categories, Fast, Faster and Era Defining, were won by an Alfa Romeo Giulia Sprint Speciale, a Ferrari 212 Inter Berlinetta and a 1977 Aston Martin V8 Vantage, respectively.

The event is still on today and all the cars, including the winners, remain on display. Entry is £35 for an adult, £18 for a child/student and £25 for seniors. 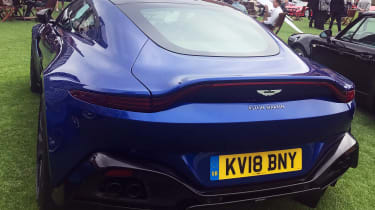 Aston Martin took its time in replacing the old, evergreen Vantage. Thankfully, the new one is a fitting replacement – a balanced sports coupe powered by a stonking Mercedes-AMG-derived twin-turbo V8 engine. This endows the two-seater with 503bhp and 505lb ft of torque, meaning 0-62mph is dispatched in 3.6 seconds, with the top speed a claimed 195mph. 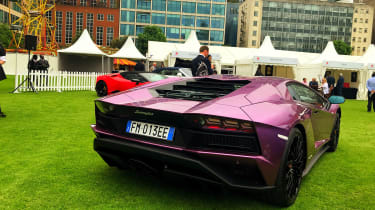 No one has ever questioned the Aventador’s striking aesthetic – it’s true Lamborghini theatre. However, few were completely satisfied with the driving experience of the model in its early incarnations. Lamborghini persisted with its flagship supercar, though, evolving it into the Aventador S – a five-star evo car. The S carries a 6.5-litre V12 that churns out 730bhp and 509lb ft of torque – enough to send it from 0 to 62mph in 2.9 seconds and on to a 217mph top speed. 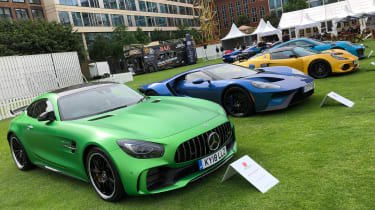 Mercedes’ take on the Porsche 911 GT3 is a serious car. Honed from the AMG GT it benefits from a raft of extensive chassis- and powertrain-based modifications, all concealed by the R’s wider stance. On paper the R outpunches the equivalently priced GT3 RS by some margin, with 577bhp and 516lb ft served up by the turbocharged 4-litre V8. Deploy all the power from a standing start and the R can crack 62mph in 3.6 and head on to a 195mph top speed.