Developed from the Peugeot 308 Racing Cup car, the 308TCR will line up against a myriad of rivals in the TCR class 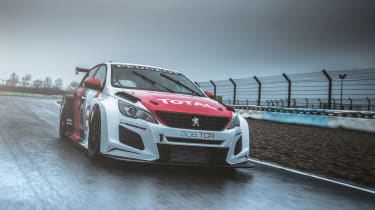 Peugeot Sport has revealed the updated 308TCR racing car that’s due to line up against rivals from Volkswagen, Audi and Honda among others in TCR compatible racing series in 2018.

Based heavily on the 308 GTi by Peugeot Sport road car, the new 308TCR benefits from a variety of upgrades over the previous 308RC, including new aero and mechanical components. Powered by the same 1.6-litre four-cylinder engine as the road car, Peugeot Sport has raised power to 345bhp and 309lb ft of torque through a redesigned induction system, exhaust and turbo. The car is designed to cover over 5000 miles of competitive driving and Peugeot Sport is confident about the engine’s sustained reliability throughout the term of a usual touring car season. 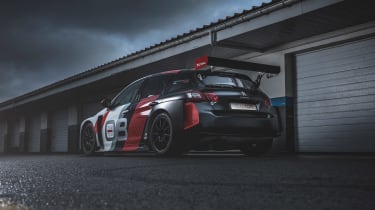 Designed in partnership between Peugeot Sport and PSA’s Paris-based Centre de Style Peugeot, the 308TCR’s bodywork has been fashioned to accommodate the wider tracks, as well as generate more downforce to provide improved directional stability at high speeds. This is achieved with the usual combination of a massive front splitter, flat underfloor and an aggressive rear wing and diffuser combo.

Priced at €109,000 before local taxes, the 308TCR, like its rivals, has been designed to keep costs down for teams. This partly explains the TCR class’ recent rise in popularity with small to medium sized racing teams. Eligible for multiple international touring car series as well as international endurance races like the Le Mans 24, the TCR series is becoming a key route for manufacturers looking to instill their hot hatches with some form of real racing pedigree.

Alongside new-for-2018 rivals like the Hyundai i30 N TCR and Renault Megane RS TCR, this middle-ground class is set to be one of the more diverse international racing classes in what promises to be an action packed 2018.