The final set of modern classics are to be auctioned at the Techno Classica show in Essen, Germany 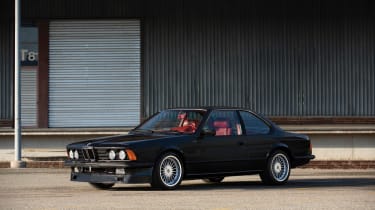 RM Sotheby’s landed the dream deal of selling one man’s collection of 140 modern classics over four different sales around the globe. The collection contains a mouth-watering selection of ’80s, ’90s and noughties machinery and includes 34 Mercedes, 27 BMWs and Alpinas, 12 Rolls-Royces along with numerous Porsches, Jaguars and Ferraris.

It’s not just the European marques that are well represented as there’s a range of iconic Japanese machinery, along with some Americana, too. While we haven’t seen the collection first hand, it would appear that the vast majority are in exceptional order, with many of them having low mileages. Many of the cars will be offered with no reserve, but given their condition and the rarity of most models it’s unlikely there will be that many bargains to be bagged.

Three of the four sales have already taken place, with the first one in Paris kicking off proceedings, followed by two more in Amelia Island and Fort Lauderdale, Florida. Rarities such as a Ferrari Superamerica, a Mercedes-Benz 500 SEC AMG Wide Body 6-litre coupe, a 9000-mile NSX and a selection of British contingent including Bentleys, Astons and Jaguars, all found new homes. 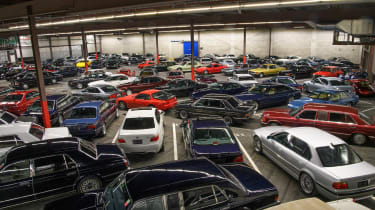 The headline sale is set to take place during the Techno Classica show in Essen on 11 April, and will feature over 80 cars including many BMW M and BMW Alpinas, AMGs and a handful of Porsches, Rolls-Royces and Bentleys. Here are evo’s top picks of the cars set to go up for auction later this month.

It’s true that its styling might not be for everyone, but if you’ve seen one in the flesh you’ll probably feel that the Wiesmann MF-4 GT is actually rather attractive despite its pastiche styling. And under its curvaceous body lie some bang-up-to-date BMW mechanicals, in this case a 4.8-litre V8 mated to a six-speed manual ’box. With just over 1200kg to propel along, the engine’s 362bhp makes light work of the task, slingshotting to 62mph in 4.6sec. With its bespoke cockpit and dramatic looks the Wiesmann GT takes some beating – when was the last time you saw one on the road? 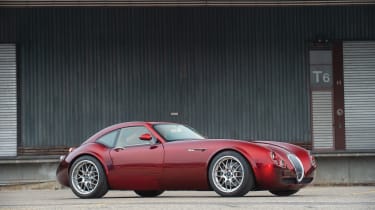 We couldn’t let this one pass without comment – after all, who doesn’t love a fast wagon? And back in the late ’70s this must, surely, have been the fastest wagon of all. AMG took one poor unsuspecting 280TE estate and shoehorned its M117 276bhp 5-litre V8 under its bonnet. The bodykit is subtle, and apart from its lowered suspension and black AMG wheels it could just about pass under the radar. The interior wasn’t forgotten and this example sports a pair of superbly trimmed Recaro buckets that look like they’d be a nigh on perfect place to wile away the miles. 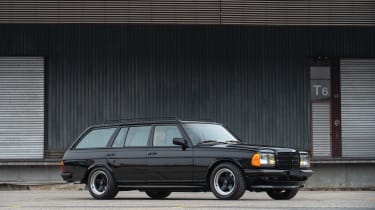 One of many Alpinas to be found in the Youngtimers collection, this particular example is one of just 17 B7 Turbo Coupes equipped with a catalyst. Although such a feature wouldn’t usually be desirable, the addition boosted low-down torque, making it a more appealing model than its cat-equipped counterpart. Despite the slight reduction in bhp, this model has 320bhp and a high torque figure of 382lb ft. This car also sports a rather striking all-red custom interior, contrasting the black exterior.

Based on the 850i, the B12’s 5-litre power plant featured an additional 49bhp over the standard car for a total output of 350bhp. This increase in power was thanks to new Mahle pistons, camshafts and fettled cylinder heads from Alpina. Revised springs and Bilstein dampers were also added to the car for additional stability and comfort, as well as subtle aesthetic tweaks such as a bodykit and the tuner’s signature 20-spoke wheels. This example is finished in Alpina Sapphire Blue with gold contrast pinstriping and a black interior and is one of just 97 cars built. 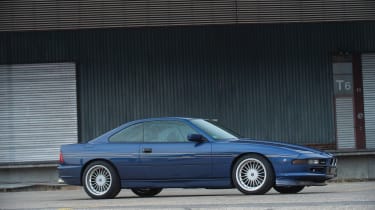 Perhaps the perfect car to sit alongside the 1979 500 TE AMG also up for grabs, this widebody 500 SEC AMG featured the desirable 5.4-litre V8 upgrade, bored out by AMG engineers – this increased power to 310bhp for a sprint from standstill to 60mph in just 6.7sec and a top speed of 155mph, brisk even for today. Also matching the 500 TE wagon is its widebody kit, menacing black-on-black colour scheme, and AMG interior upgrades. 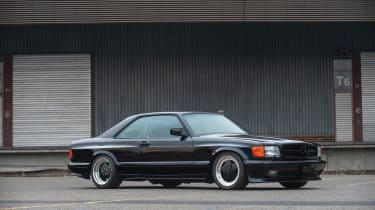 Not too keen on the bold red interior of the 1987 B7 Turbo also up for offer? This 1982 model from five years prior is more subtle, with a white exterior, tan interior and tasteful contrasting gold Alpina stickers. Launched in 1978, the B7 was Alpina’s first full conversion for the 6-series platform, in this form featuring a 300bhp turbocharged six-cylinder from the 630 CSi. Alpina also added upgraded Bilstein suspension, ventilated brake discs and a bodykit. This example also has yellow headlights, which makes it infinitely more desirable in our book... 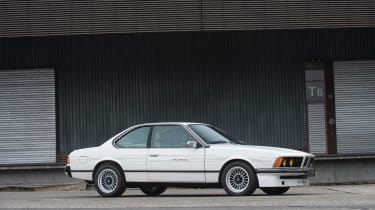 The cars we’ve highlighted here are just the tip of the iceberg – you’ll find an example of just about everything you could care to mention when talking about performance cars from the 1980s to 2000s in this collection. Have a look for yourself at www.rmsothebys.com