Buyers of £2.5m hypercar can choose from ‘anything is possible’ options list 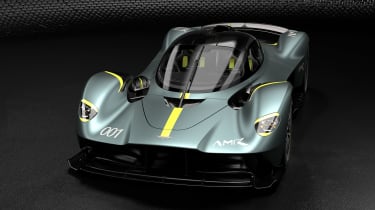 As the Aston Martin Valkyrie draws closer to production, the firm has started to reveal some of the personalisation options that’ll be available for this limited-run £2.5m hypercar. Alongside a wide array of Q by Aston Martin aesthetic options, Aston Martin has also detailed an optional AMR Track Performance Pack, which as its name suggests, includes a selection of track-only components which will make the Valkyrie even faster on closed racing circuits.

This AMR Track Performance Pack includes a suite of non-road-legal components that Aston Martin says improves the lap time over a standard Valkyrie by up to eight per cent, depending on the circuit. The pack includes a new front air clamshell, increasing downforce over the front axle, which is paired with an entire set of secondary external body panels.

Aston Martin has also revised the suspension with an even more track-orientated set-up, while a track-only titanium brake package, made up from new backplates, pistons and bobbins, and new forged magnesium wheels with detachable carbonfibre aero covers are also included. These components are interchangeable with the standard parts, keeping the Valkyrie road legal, as opposed to other track-only hypercar specials like the McLaren Senna GTR, which owners will surely appreciate after handing over more than £2.5m. 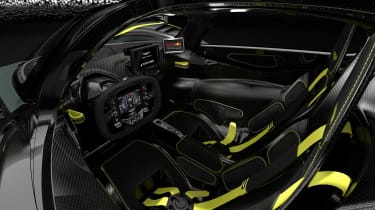 Cars equipped with the Track Performance Pack will be available in three curated AMR liveries, but for an extra fee Q by Aston Martin will apply a bespoke livery, with near-limitless options for the body, interior and detailed specification.

Q by Aston Martin will also happily turn its hand to the standard Valkyrie too, with Aston Martin revealing some Q-suggested design themes and bundled design packages. One such package is the Gold Pack, which features (you guessed it) a gold leaf design inlaid below the final coat of clear lacquer on the bodywork. Another is the Carbon Jewellery Pack, finishing details like the headlight inners, sidepod vanes and various interior components that aren’t already made from or finished in carbonfibre.

> Click here for more on the Mercedes-AMG Project One

Despite the Valkyrie’s minimalist interior, there is still plenty of opportunity to personalise, with every component from the seats, steering wheel and even the finish of the interior switchgear able to be specified to the owner’s specific taste.

As one of the most expensive new cars ever, it comes as little surprise to see it’s also one of the most customisable. Valkyrie production will begin later this year, but if you were considering putting your name down, it might be a little late, as despite its ‘three-bedroom house in West London’ price tag, all 150 units have been spoken for.