Featuring a ‘major technical update’, the Passat will be the brand’s first model to offer partially automated driving at up to 130mph 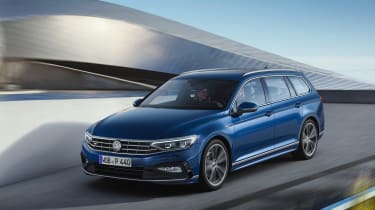 The new Volkswagen Passat will be shown at this year’s Geneva Motor Show in both saloon and estate guises, featuring a “major technical update”, according to the brand.

Thanks to the new ‘Travel Assist’ function, it will be the first model from the company to offer partially automated driving at cruising speeds (standing to 130mph) and will also feature a whole host of other technology upgrades over the outgoing model.

A brand-first ‘capacitive steering wheel’ will allow the driver to interact with the car directly through the surface of the wheel and the new ‘Emergency Steering Assist’ feature will also increase safety during evasive manoeuvres through automatic application of the brakes. As first seen on the Touareg, Volkswagen’s innovative ‘IQ.LIGHT’ technology will also be seen on the model, making night driving safer and more comfortable for owners. The new Passat GTE will receive a bump in pure electric range over the outgoing model, to around 34 miles (WLTP). 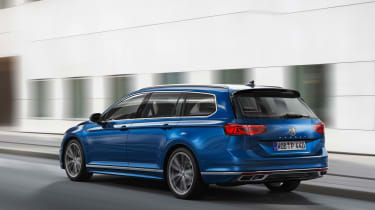 The car will sport the brand’s third-generation Modular Infotainment Matrix (MIB3), featuring a permanently integrated SIM card to allow for a variety of new online features. Should the driver choose to have the car ‘always online’, the use of a mobile phone as a key to unlock and start the car will be available. The ability to store vehicle settings in the cloud, receive improved navigation services with real-time information and have online voice recognition have also been added to the new Passat.

Closely integrated with the new MIB3 infotainment system is the marque’s new and improved ‘Digital Cockpit’, with high-contrast displays. Through the use of the new multifunction capacitive steering wheel, three different display configurations can now be chosen, allowing drivers to see only the information most important to them behind the steering wheel.

The model will be launched in September after its Geneva Motor Show premiere in March. Pricing information for the new Volkswagen Passat is yet to be announced.