Plug-in hybrid saloon and estate debut with prices starting from £36,525 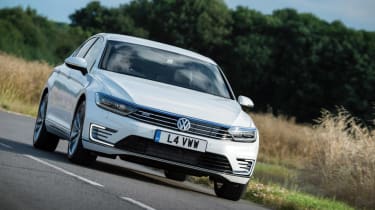 Back in 2014 Volkswagen announced the Golf GTE, which paired the sporting appeal of the GTI and GTD models with a plug-in hybrid drivetrain.

The brand’s second GTE model goes on sale today, in the form of the Passat GTE, which also pairs a turbocharged petrol engine with an electric motor, offering a combined power output of 215bhp.

Individually, the 1.4-litre TSI petrol engine develops 154bhp and the electric motor a further 113bhp, but due to the different power peaks of combustion and electric sources, the overall figure is a little lower.

Same applies to the engine and motor’s torque outputs: combined, there’s 295lb ft on offer, but the electric motor alone can offer 243lb ft from a standstill and the petrol unit 184lb ft on its own – contributing to the relatively heavy Passat’s 7.6-second 0-62mph time.

Power is sent through a specially-developed six-speed DSG transmission, which – contrary to its name – features a third clutch to decouple the petrol engine from the drivetrain for ‘coasting’.

Pull away from rest and the Passat GTE will default to its electric-only E-Mode. The car can also run in hybrid mode, and should you wish to charge the battery on the move, a Battery Charge mode is available. In GTE mode, both power sources combine for maximum performance. 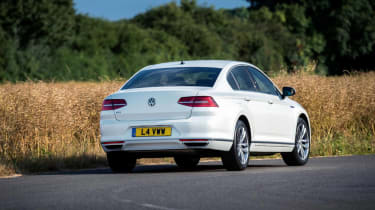 On electric power alone the 9.9kWh capacity is enough for 31 miles of engine-off running (charging in 2h30m from a 3.6kW wall box) and thanks to its contribution in NEDC fuel economy testing, results in the eyebrow-raising 166mpg and 39g/km CO2 ratings.

The reality will depend entirely on how much of each power source you use on a regular basis – expect better economy in city running than on the motorway, for instance – so the usual caveats apply here.

Pricing starts at £36,525 for a basic Passat GTE and £38,075 for the estate version. Advance models offer higher specification (including a larger 8-inch navigation screen, LED headlights and Nappa leather trim) for £40,180 as a saloon and £41,730 in estate form. All are available with the UK government’s plug-in car grant, which shaves £2500 from those figures.