To celebrate the 110th Anniversary of the brand, Bugatti has unveiled a limited edition of its 1479bhp hypercar 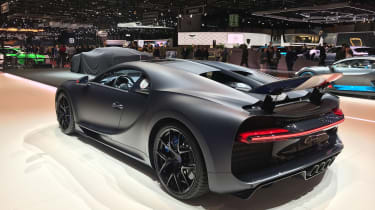 To mark its 110th Anniversary, Bugatti has announced the production of the “110 ans Bugatti” Chiron Sport, featuring a design based around the iconic colours of the French flag. The car hasn’t received a bump in performance, but with a sub-2.4sec 0-62mph time and a top speed of over 260mph, few would deem it necessary...

From the 1920s Type 35, to the record-breaking EB 110 of 1987 and the world-renowned Bugatti Veyron 16.4 after the brand’s last revival, the marque’s current model, the 8.0-litre quad-turbo 1479bhp Chiron, marks this latest anniversary with the “110 ans Bugatti” limited edition. The car is a “tribute to France” according to Bugatti, featuring the colours of the French tricolor throughout the car.

Although it might seem subtle at first glance with the matte ‘Steel Blue’ finish, look closer and you’ll notice a rather bright rendition of the French flag on the underside of the airbrake, as well as many further nods throughout the rest of the car. The front section of the 110th Anniversary car is finished in a matte, blue-tinted, exposed carbonfibre with the rear a standard matte paint finish produced in a complex process to create a “sheen like hot-rolled steel”. The highly-recognisable “C” surrounding the passenger compartment as well as the rear diffuser, bumper and engine cover are all also finished in “Steel Blue” carbonfibre to match. 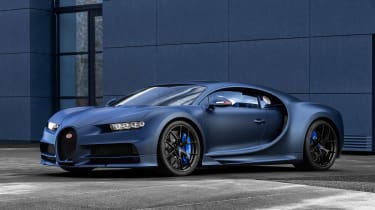 The subtle blend of exposed carbon fibre and standard opaque blue paint is designed to divide the car’s design into two sections, and is reminiscent of historic models from the brand’s past. Wheels are also finished in matte black to match the exhaust tips, spoiler mechanism and Ettore Bugatti logo at the centre of the rear - behind them sitting French Racing Blue brake calipers.

Usually a costly option on the standard car, the “Sky View” roof is standard on this special edition car, consisting of two fixed glass panels above the driver’s and passenger’s seats with a newly developed laminated structure keeping the interior space quiet and safe.

Demonstrating the sheer attention to detail Bugatti provides, the car sports a specially-crafted, solid silver medallion in the central console with enamel inserts, mounted on a carbonfibre plate. The sandblasted, hand-polished aluminium filler cap also features a “110 ans Bugatti” emblem and should the customer desire, the base plate of the filler cap can be painted in either blue or white. 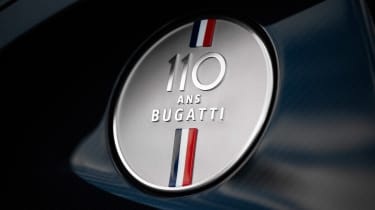 To contrast the deep blue leather and Alcantara interior finish, the colours of the French flag feature on the headrests and back rests of the sports seats, as well as the 12 o’clock marker on the steering wheel. As you’d expect, there’s no shortage of carbonfibre throughout the interior either.

Pricing for the 110 ans hasn’t yet been announced, but we’d expect it to exceed the £2.36m starting price of the ‘standard’ Chiron Sport. Just 20 examples will be produced worldwide, so you’d better get your order in quick.