F1-inspired Vandal One R revealed with 1000bhp per tonne

Going head-to-head with models such as the BAC Mono, the Vandal One R features a power-to-weight ratio twice that of the Bugatti Veyron 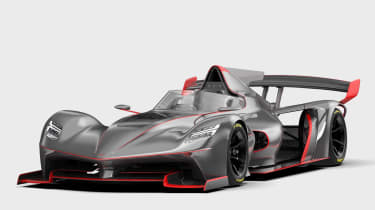 Following drip-fed information on the model’s development late last year, US-based Vandal Cars has revealed the single-seat, 560bhp One R in full, rivalling cars such as the BAC Mono and Ariel Atom V8.

Powered by a heavily modified turbocharged 2-litre four-cylinder Honda power plant, the car produces 560bhp in One R form, or 340bhp in the base car, exceeding the power of Ariel’s most potent Atom by 60bhp in R form. Thanks to a kerb weight of just 555kg, the power-to-weight ratio is impressive to say the least…

At around 1000bhp per tonne, the Vandal One R has almost double the power-to-weight ratio of the Bugatti Veyron, and almost the same as a Formula 1 car running on its internal combustion engine. The impressive stats don’t stop there, with the model featuring 800kg of downforce, F1-style pushrod front and rear suspension, an FIA-compliant carbonfibre monocoque (with an FIA-spec ‘Survival Cell’ complete with neck braces) and brakes capable of over 2Gs of braking force. 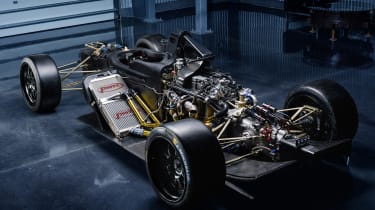 With extreme downforce and minimal drag on the agenda, designing the aero for the One wasn’t an easy task. After much refinement and testing, the company came up with a solution similar to that seen on the Aston Martin Valkyrie and Audi eTron R18 LMP, reducing high-pressure areas in the front fenders that could create unwanted lift. The brand also says the rear diffuser has been designed in such a way that it’s now responsible for almost 35 per cent of the One’s total downforce.

Vandal says the One ‘represents the closest experience possible to a Formula 1 car’. And we believe it. The brand claims the model is capable of over 3Gs of lateral acceleration, far exceeding any road car and coming close to F1 levels of grip. This will likely be thanks to its extreme downforce alongside the 265/35/18 and rear 325/30/18 Pirelli slicks fitted to the car. 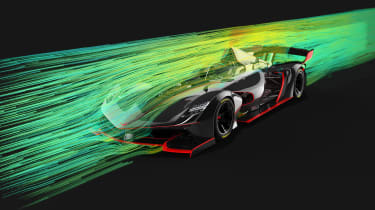 As if that wasn’t enough, the model also sports carbon bodywork with aero optimized through CFD (Computational Fluid Dynamics), a six-speed sequential gearbox capable of 40ms shifts, as well as push to pass. To allow owners to refine their lap times, the car also has a ‘Full Data Acquisition System’ with 12 sensors and an optional camera to help drivers analyse braking points and overall efficiency. This technology allows Vandal to offer the world’s first remote driver coaching app and program for the One.