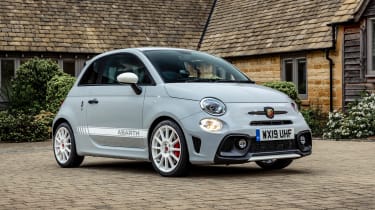 Abarth has revealed the return of its Esseesse badge to the UK, placed on an updated version of the ever-popular 595 hot hatchback. Alongside a subtle range-wide update, the new 595 Esseesse rejoins right at the top of the current range with bespoke new parts and badging.

The new Esseesse is based on the 595 Competizione, but to that car’s comprehensive feature list adds new white-painted 17-inch wheels (or maybe “old”, as they’re the same items as on the previous Esseesse from 2008), a limited-slip differential, and an Akrapovic exhaust system with carbon-wrapped exhaust tips.

The current 595 Competizione’s 1.4-litre turbocharged four-cylinder engine remains unchanged, producing 178bhp at 5500rpm, with 185lb ft of torque available at 3000rpm. Connected to the peppy motor is the usual six-speed manual transmission – no semi-automatic option is available – which sends power to the front wheels. Keeping that power under control, on a platform shared with a 16-year old Fiat Panda mind you, are a set of Brembo brakes on the front axle, gripping vented and drilled discs. 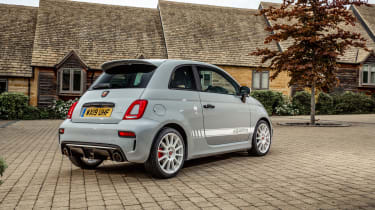 Also new is an uprated air filter by BMC, increasing airflow and giving the induction system more bite to balance out the extra noise being emitted from the Akrapovic exhaust system.

Inside, the Esseesse comes as standard with carbonfibre-backed ‘Sabelt 70’ bucket seats, carbonfibre pedals, and bespoke embroidery and trim-work. Some of these detail changes within the cabin are also available on lesser Abarth 595 models, but the carbonfibre is specific to the new Esseesse.

Available in both hatch and convertible forms, the Esseesse tops the 595 range with prices starting at £25,295 and £27,295 respectively.