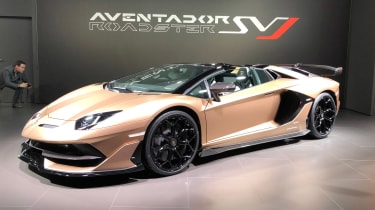 Hot on the heels of the Lamborghini Aventador SVJ Coupe comes the Roadster version packing the same naturally aspirated V12 as its hard top sibling. Lamborghini says the ‘Super Veloce’ and ‘Jota’ suffixes denote the car’s performance and prowess and despite removing the roof this latest Roadster from Sant’Agata shouldn’t lose out too much dynamically to the coupe.

The Roadster’s roof is constructed from lightweight carbonfibre and each part weighs just six kilos. Released with quick release catches the carbon panel is stored in the compartment in the Aventador’s nose when you want to indulge in roof-off motoring and enjoy the full aural delight of the V12. In total the SVJ Roadster weighs 1575kg, just 50kg more than the coupe. 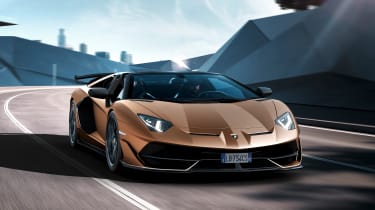 Despite losing its roof the Aventador SVJ Roadster still features Lamborghini’s latest Aerodinamica Lamborghini Attiva (ALA) system, which varies aero load to achieve high downforce or low drag, depending on dynamic conditions using electronically-actuated motors positioned in the front splitter and the rear wing. In conjunction with Lamborghini Dinamica Veicolo Attiva 2.0 (LDVA 2.0), it uses dedicated algorithms which activate the ALA system flaps in less than 500 milliseconds to ensure the best aerodynamic set-up of the car.

Lamborghini says the advanced aerodynamics of the Aventador SVJ Roadster are uninterrupted whether the roof is on or off and that the new Roadster offers 40 per cent more downforce that the older SV version of the car. The car’s rear screen is operated electronically and while it reduces buffeting in the raised position with it lowered Lamborghini says it amplifies the soundtrack of the naturally aspirated V12.

The suspension, rear-wheel steering and ESC systems have all been specifically calibrated for the SVJ Roadster and it sits on a set of lightweight ‘Nireo’ aluminium rims, fitted with specially designed Pirelli P Zero Corsa tyres or with optional road-legal Pirelli P Zero Trofeo R rubber.

The Aventador SVJ Roadster will be offered in almost 350 different colours including the new hue of Bronzo Zenas shown on the Geneva show car and there will be plenty of personalisation options offered on the 800 examples that will be produced. Prices start at just under £390,000.