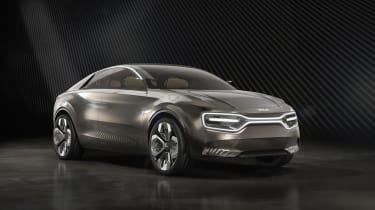 More than ever the message at Geneva is electrification, and Kia has joined several other manufacturers in presenting an electric concept car at the Swiss show.

The Imagine by Kia concept (we’ll stick to Kia Imagine for clarity…) is a full battery-electric four-door passenger car, with a fastback profile and a hint of crossover to its raised ride height and relatively tall body sides.

It’s also billed as a “large C-segment” car, which puts it roughly in line with Kia’s existing Proceed, but other than a few cursory details it shares virtually nothing with Kia’s production vehicles, and is instead a look towards the future – not least Kia’s desire to produce more electric vehicles. 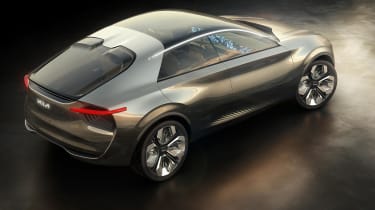 The most notable visual aspect of the car is the reinterpretation of the brand’s “tiger mask” grille design, which in this concept is illuminated and surrounds the slim headlight units. Details more familiar to an existing Kia model (though only just) are the wrap-around tail light units, with a slim bar extending slightly down the car’s flanks, while a chrome strip running along the roofline is also a nod to certain Kia production models.

The wheels are 22-inches in diameter at each corner, with a complex design that incorporates polished, diamond-cut and even acrylic elements – the latter matching several acrylic details seen elsewhere on the car, including the headlight and tail light units. 255/35 R22 Goodyear “Intelligrip EV” rubber is used, which is designed to communicate information from the road surface to the car.

The interior is unlike anything else however, and firmly in the realms of concept fantasy. We’d been a little concerned that the ludicrous bank of 21 screens shown in teaser images was a sign of things to come, but thankfully it’s a deliberate touch poking fun at the industry’s obsession with displays – and we’re confident Kia won’t foist anything similar on us in any future production car… 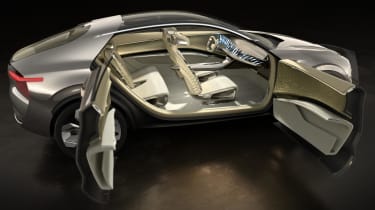 Little about the Imagine’s drivetrain has been revealed, but Kia does state that it’s unrelated to its existing e-Niro EV, and is instead “underpinned by a low-mounted, induction-charged battery pack that powers a compact drivetrain.”

“We imagined a future where engaging and dynamic cars like this were an integral part of our transport requirements,” explained Vice President of Design for Kia Motors Europe, Gregory Guillaume.

Whatever form it eventually takes, Kia has shown in recent years that it’s able to cater for car enthusiasts, so hopefully that will continue as Kia moves towards electric power too.