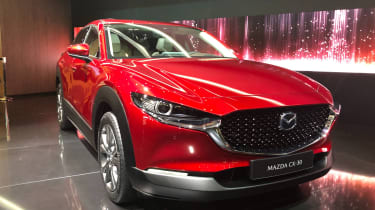 Car companies the world over are busy filling niches in ranges with new SUVs and a new one in Mazda’s current line up is the CX-30 that received its world debut in Geneva. It slips neatly between the CX-3 and CX-5 SUVs and it’s not been named the CX-4 as that more logical moniker is already in use by a Chinese market-only model.

When it goes on sale in the UK later this year the CX-30 will enter a busy segment and will have to do battle with the class-leading Nissan Qashqai and more recent rivals such as the SEAT Ateca. Like the majority of Mazda’s recent offerings the CX-30 is a handsome machine and embodies, says Mazda, the company’s Kodo design language.

Mazda claims the CX-30 offers user-friendly packaging in a cabin that comfortably seats four adults and that its raised ride height makes getting in and out ‘a breeze’ while its compact dimensions endow it with an urban-friendly nature.

The engine line-up for the CX-30 has not been fully confirmed but it will feature Mazda’s latest range of Skyactiv units with both petrol and diesel examples on offer. Mazda’s Spark Plug Controlled Compression Ignition technology will also be employed which Mazda claims offers the free-revving nature of a traditional petrol engine with the economy and response of a diesel.

All petrol-engined examples will be equipped with Mazda’s M-Hybrid set-up which features a mild hybrid system with an electric motor and a 24V 600kJ lithium-ion battery to assist the petrol engine. The CX-30 will feature four-wheel drive with power transmitted either via a six-speed manual or six-speed automatic and also comes with ‘G-Vectoring Control’ to balance torque distribution between the front and rear wheels.

While the CX-30 could be dismissed as yet another compact SUV Mazda does say that it offers ‘excellent driving dynamics’ and ‘driving pleasure of unprecedented quality’. We’ll let you know if it’s been successful once we’ve driven it.