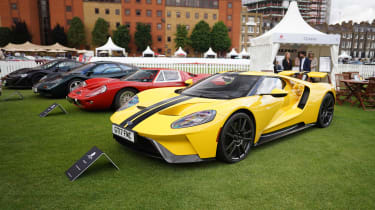 Once again, evo and sister title Octane have brought some of the world's fastest, most significant and most beautiful cars to the heart of London with the 2019 London Concours. Described as an 'automotive garden party', the event runs from the 5th-6th June at the Honourable Artillery Company with 80 cars present across various themed classes.

This year evo has its own ‘supercar paddock’, where we’ve curated the latest and greatest exotica in a formidable display of style and horsepower. There is also a class purely for cars wearing the famous prancing horse badge, with landmark Ferrari cars, modern and old, such as the 599 GTO, LaFerrari, Daytona, Testarossa, 512BB and more, in attendance. Artisan goods and a delicious selection of food and beverages will complement the stunning machines parked on the lawns.

Guests can also explore ‘The Icons’; a collection of vehicles that came to represent their generation; think ‘90s and it’ll be the McLaren F1 or think ‘60s and it’ll be the Aston Martin DB5. Whether it’s through ripping up the rulebook, finding fame on the silver screen or being the poster car for a whole generation of buyers, each car in this class has established itself as a verified automotive icon. 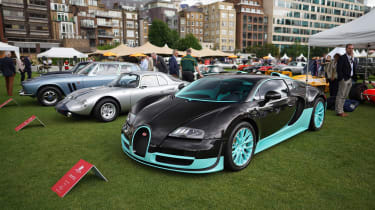 Alternatively, dwell on ‘The Innovators’, a group bringing together cars that blazed a trail with new technology both on the race track and on the road. Expect to see the first ground effect Formula One car, a Lotus 79, and innovators like the Bugatti EB110; the first road car to use a carbon fibre monocoque.

Also featuring at the London Concours is a display of ‘The Outlaws’; classic modified cars that are part of a recent global phenomenon spearheaded by the likes of Rod Emory; think chopped-roof Lancia Aurelias and de-chromed Porsche 356s. And then there’s the ‘Lost Marques’ – these cars are an homage to some of the greatest automotive manufacturers lost to time; Alvis, Panhard, Frazer-Nash, Bizzarrini and more.

A number of special motoring features are also part of the 2019 London Concours, including a colourful display of Lamborghini Miuras. Fifty years on from its starring role in the opening scene of The Italian Job, London Concours celebrates the Miura with a collection of seven variants, each in a different, lurid shade. There’s no better way to pay homage to the car many consider to be the world’s first ‘supercar’. Last year’s London Concours winner, the ferocious ‘Beast of Turin’, will be pride of place on a rotating turntable, courtesy of Spin-it. 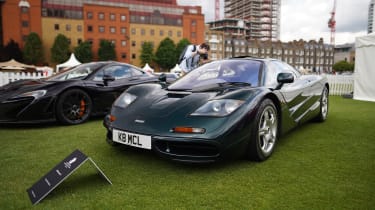 The McLaren F1 was a seminal moment in performance car history; the fastest car in the world for more than a decade. But it wasn’t just its outright speed that changed the automotive landscape; the F1 was the first production car to use a carbon fibre reinforced polymer monocoque chassis, and its clean, wingless design utilised rear diffusers and electric fans to create downforce. Five prototypes of the McLaren F1 were built, including XP-5 (experimental Prototype 5). 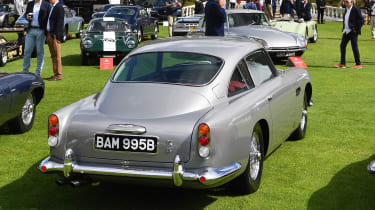 Largely due to its appearance in the James Bond film, Goldfinger, the DB5 is the most renowned of all models in the famed Aston Martin DB Series. An evolution of the final series of DB4, the DB5 possessed an all-aluminium 4.0-litre engine with three SU carburettors, producing 282bhp and propelling the car to a maximum speed of 145mph. The car displayed here is full matching numbers with original ZF manual gearbox. 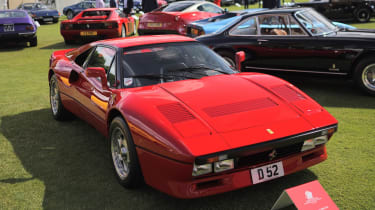 Built to compete in the newly formed Group B Circuit Race series, the 288 GTO (or simply GTO) is a homologation of the Ferrari 308 GTB. Owing to FIA regulations for a legitimate homologation, a minimum of 200 288 GTOs had to be produced – this particular model was #22. Its upgrades were plentiful; a 400bhp, 2,855 cc DOHC mid-mounted V-8 engine with twin IHI turbochargers, Behr intercoolers, and Weber-Marelli electronic fuel injection, five-speed manual transmission and four-wheel independent suspension. 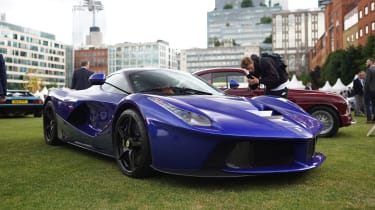 The most modern of all the cars on show within ‘Great Marques – Ferrari’, the LaFerrari is a shining example of the very latest Ferrari innovations. One of just 499, Ferrari’s latest hypercar is capable of 0-60mph in less than three seconds, with a combined 949hp from its petrol-electric powertrain. This delivery mileage Ferrari LaFerrari is presented in ‘Blu Elettrico Viola’ Special Paint with ‘Hermes Orange’ Inspired Tailor-Made Leather Interior. 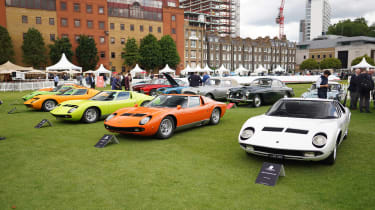 The Lamborghini Miura set the supercar world alight when it burst onto the scene in 1966. Its rear, mid-engined layout has become the go-to formula for almost every great supercar since. 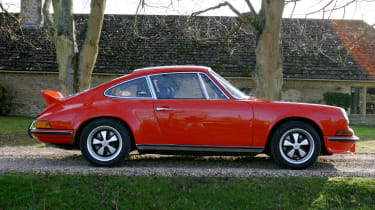 This rare 911 is one of the original 500 Carrera 2.7RS models built for homologation purposes, using lighter gauge metalwork and thinner glass. It is an ‘M472’, today known as ‘Touring,’ version. The car retains all of its original lightweight exterior panels, and is original specification throughout. Since 2000, it has had a bare metal restoration and at the same time there was refurbishment of the engine lid, wheels, carpets, headlining, and driver’s seat, all to factory specification.