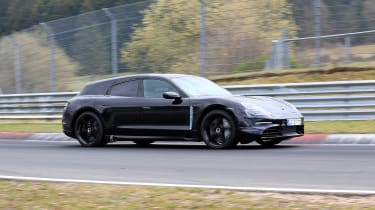 Ahead of the reveal of the standard car, Porsche has been spotted testing the Taycan Sport Turismo estate at the Nurburgring, a model set to sit alongside the rugged Cross Turismo and the Tesla Model S-rivalling Taycan 4-door.

The Porsche Taycan has been a long time coming, with the Mission E concept that previewed the car first making an appearance at the 2015 Geneva motor show. Since then, we’ve seen a host of teaser images and sketches, with official specs recently surfacing. The standard car is expected to do the 0-62mph sprint in under 3.5secs and go onto a top speed of 155mph, with two electric motors generating a combined 592bhp. We’d expect similar performance from the Sport Turismo estate.

Design tweaks are similar to those found on the Panamera Sport Turismo, with everything from the B-pillar backwards given a redesign for more interior space and practicality. The Panamera variant only saw a marginal increase in weight over its standard counterpart, weighing just 30kg more - similar numbers should be expected for the Taycan. 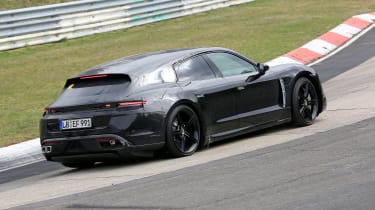 The Sport Turismo will sit on the J1 platform, developed specifically for Volkswagen Group’s all-electric models. In order to effectively distribute weight, batteries are placed in a skateboard layout with two electric motors – one on each axle – powering all four wheels.

Porsche says the Taycan is capable of 300 miles on a full battery, putting it just below the claimed 335 miles of the range-topping Tesla Model S. The slight increase in weight with the addition of extra bodywork may see the range figures change with the Sport Turismo version, but, as with the car’s performance, we don’t expect to see any drastic differences.

There’s no direct rival to the Taycan Sport Turismo as of yet, with the Tesla Model S only coming in saloon form and other similarly-priced EVs being SUVs, such as the Mercedes EQC, Tesla Model X and Jaguar I-Pace.

Pricing for the model is yet to be announced, but expect it to set you back slightly more than the standard Porsche Taycan.