The British brand has given the Clubman a facelift for the new model year, with updated styling, trim levels and engine specs 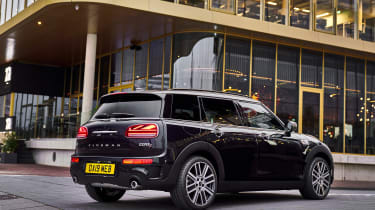 Though it might take an expert eye to spot differences between the updated and previous car, new to the Clubman is a re-styled front grille, adopting a BMW-esque approach by extending it across the entire bumper, alongside sharper front and rear lights, the latter retaining the unique Union Jack design. If you opt for Sports suspension you’ll also get a 10mm reduction in height over the previous car.

Though a hardcore John Cooper Works Clubman will join the range at a later date, three model variants are available currently. The range starts at the three-cylinder, 136bhp Clubman, moving through to the current range-topping Cooper S Clubman with a 192bhp, four-cylinder unit capable of a 7.3sec 0-62mph sprint and a top speed of 142mph – a diesel model is also available. Although a six-speed manual ’box comes as standard on all models, a seven-speed dual-clutch automatic is also offered as an option.

Mini tends to throw plenty of tech into its models, and the new Clubman is no exception. Adaptive LED headlights, updated LED daytime running halo lights, MINI Navigation, Apple CarPlay, automatic headlight activation and ambient lighting are all available. The Navigation pack comes as standard in the new Clubman on a 6.5-inch screen, with the option to upgrade to a larger 8.8-inch display. An uprated Harmon Kardon sound system and head-up display are also available as options. 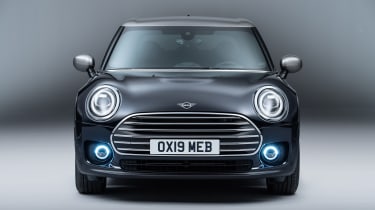 Aside from minor tweaks to the design, the new Clubman is available with three new colours – Indian Summer Red, British Racing Green and a new exclusive black shade – as well as new 18-inch wheels and a 19-inch John Cooper Works wheel – the model is fitted with 16- or 17-inch wheels as standard.

Order books open this month, with prices starting from £21,000.