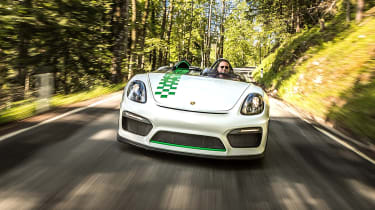 One unfortunate consequence of modern safety and technology is an increase in the size and weight of our cars. So whenever a manufacturer creates a lightweight model, we get rather excited indeed. Enter, the Porsche Boxster Bergspyder.

Originally commissioned in 2015 to test the capabilities of the 981 Boxster platform, given the ultimate lightweight, minimalism treatment, the concept follows in the footsteps of the Porsche 909. A racer that weighed just 384kg, it was the lightest model ever used by the brand, and featured the same white and green colour scheme as used on the Boxster Bergspyder.

The Bergspyder brief required engineers to think extreme, and so off went the roof and out went the passenger seat. Various components and panels were converted to lightweight materials, and even the door handles were removed for maximum weight savings. The result is a single-seater sports car without a roof, door handles or a windscreen. 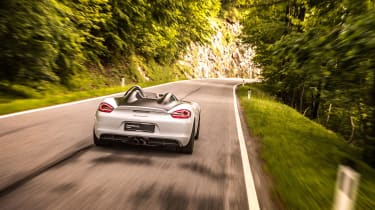 Step inside and you’ll be greeted by a cockpit similar to that in the 918 Spyder, with both the seat and dash binnacle taken from that model. Ahead of the wheel is a rounded wind deflector to make driving a slightly less blustery affair, and to your right, an open space for the storage of a helmet, removable driver’s seat cover and additional luggage.

Under the bonnet is the same 3.8-litre boxer six-cylinder found in the Cayman GT4, producing 387bhp for an impressive 352bhp per tonne power-to-weight figure. This brings it in line with the 997 911 GT2. Claimed 0-62mph is just over four seconds, and the brand says a 7min 30sec Nürburgring lap time would be possible. 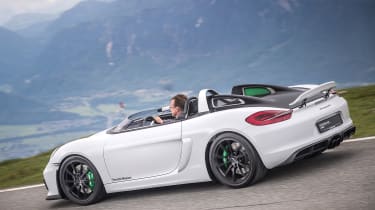 Being a one-off, we’re unlikely to ever get behind the wheel, but being the same weight as the excellent Alpine A110 with a 387bhp boxer six-cylinder, we’d imagine it would be a rather thrilling experience.

As you might imagine, registering a roofless, door handleless car for sale is a bit of a tricky task in most countries, and so it was decided that the model would remain a concept. The Porsche Boxster Bergspyder will make its public debut at the 2019 Gaisberg hill climb race in Austria.