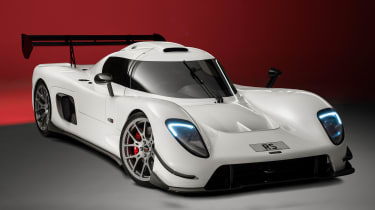 Leicestershire-based Ultima Sports has been producing absurdly fast, motorsport-inspired machines for 35 years, keeping its formula the same since the first car rolled out of the factory in 1983. In the biggest shake-up in the brand’s history, it has unveiled an entirely new model, bringing its hardcore formula into 2019.

The new flagship features an all-new body inspired by Group C Le Mans cars, constructed primarily of carbonfibre for weight saving. In order to surpass the incredible performance of previous models, the company utilised MIRA’s state-of-the-art wind tunnel to hone its aerodynamics, making for an incredible peak downforce of 1000kg and a drag coefficient of 0.304 in certain specifications.

To achieve these numbers, a chassis-mounted front splitter with integrated vortex generators, front dive planes, canards, a rear diffuser and a swan neck top-mounted rear wing all work in unison. In order to aid cooling of the power plant and braking system, NACA ducts, a roof scoop, side scoops and quad wheel arch vents are also used. 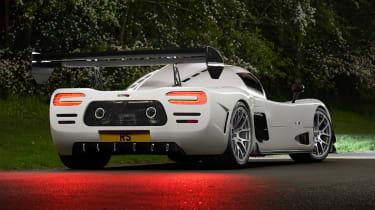 Powering the model is Chevrolet’s bulletproof 6.2-litre V8 LT crate engine in multiple levels of tune. The base LT1 variant produces a mere 480bhp, stepping up to the LT4 for 650bhp and the supercharged LT5 for 800bhp. Should you want to go all-out, the LT5 can also be tuned to a rather ridiculous 1200bhp. Given its (spec-dependant) 930kg kerb weight, that gives the model a power to weight ratio of as much as 1311bhp per tonne, breaking the elusive bhp per kilogram barrier by quite some margin.

In range-topping 1200bhp LT5 form, the new Ultima RS is capable of a claimed 2.3sec 0-60mph time, a 4.8sec 0-100mph time, can cover the standing quarter in just 9.2sec at 156mph and go on to a top speed of over 250mph. These figures make even the £2m+ Koenigsegg Agera RS look a little sluggish, bar top speed. Ultima Sports also claims the new model is one of the quickest decelerating cars on the market, going from 100mph to 0 in a face-altering 3.3sec.

Other details include the use of a six-speed Porsche manual gearbox in all examples, Michelin Pilot Sport Cup 2 and Pilot Sport 4 S tyres (though we’d suggest choosing the former, especially with the 1200bhp package), bespoke lightweight forged wheels and 362mm AP Racing discs with upgraded six-pot calipers.

Exact pricing for the Ultima RS is yet to be revealed, but the brand says a self-assembly package starts at around the same price as a new BMW M3. Order books are now open, and if you’d like to see it in the flesh, head to Goodwood Festival of Speed in early July where the model will make its debut.