Following the reveal of the Coupe, Convertible and full-fat M8, BMW has revealed its four-door 8-series Gran Coupe 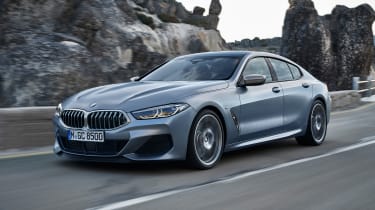 Following shortly behind the range-topping M8, BMW has added the Porsche Panamera-rivalling Gran Coupe to the 8-series range. Effectively filling the gap left by the 6-series Gran Coupe, the model aims to provide the benefits found in both coupe and four-door models.

Unlike some ‘four-door coupe’ models we’ve seen, BMW claims the 8-series Gran Coupe is the only car in its segment to have been developed directly from a two-door coupe, as opposed to a larger, less dynamic four-door. Though we’ll have to get behind the wheel to test the claim, this is said to allow for four-door practicality, as well as the driving dynamics associated with a coupe.

The above might all sound very exciting, but there’s no getting around the fact that the model is a large machine - measuring 5082mm in length and 1932mm in width. It’s 60mm taller than the Coupe, too, and although this won’t improve the driving experience, it’ll almost certainly provide greater comfort for passengers, thanks to better headroom and legroom. 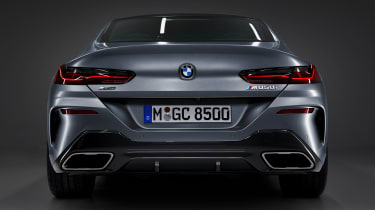 With the increased number of doors comes an increase in kerb weight (70kg over the Coupe), but BMW has done its best to keep weight to a minimum through the use of lightweight materials. Various components such as the doors, bonnet, engine subframe and front bulkhead are made from aluminium, with carbonfibre used in places on the floorpan, as in the coupe, and 7-series saloon. A carbon roof can also be optioned, a slightly loweringt the Gran Coupe's centre of gravity.

The 4+1 model features all of the gadgetry you’d expect from an 8-series, with adaptive LED headlights, ambient interior lighting, BMW’s 12.3-inch Live Cockpit, a 10.25-inch infotainment display and heated seats all standard. At an additional cost, you can have BMW’s Laserlight headlights, plenty of BMW Individual interior and exterior additions and the usual uprated M Performance parts too. Also an option is a new Gran Coupe-specific electric panoramic glass roof, spanning the entire length of the interior.

The range currently consists of the 522bhp twin-turbocharged V8 M850i, petrol rear-drive 840i and diesel 850d, providing 3.9, 5.2 and 5.1sec 0-62mph times respectively, whilst all models have a top speed of 155mph. If the M850i isn’t quite enough for you, an M8 variant will likely break cover in the not-so-distant future.

Order books are open now, with first cars set to hit roads in September. Pricing is yet to be announced.