Details of the internal combustion engined versions of the new Vauxhall Corsa has been unveiled, promising more efficiency and tech 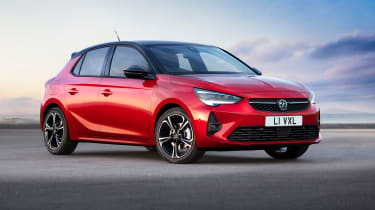 Following the reveal of the new all-electric Vauxhall Corsa-e in May, the brand has now revealed details of the combustion engined variants of the fifth generation supermini. Though an all-electric lineup is the dream for many manufacturers, highly-efficient combustion models remain the reality for most customers so there’s a lot riding on the petrol and diesel Corsas and their new PSA-sourced tech.

Vauxhall claims that all of its new Corsa engines emit less CO2 than the most efficient versions of the previous car, demonstrating the increased efficiency on offer. Sitting at the bottom of the range is a 1.2-litre, 74bhp unit, mated to a 5-speed manual gearbox as standard. Further up the range is a 1.2-litre, 3cyl turbocharged engine, pushing 98bhp and 151lb ft of torque through either a 6-speed manual or optional 8-speed automatic. These numbers aren’t mind-blowing from a performance perspective, but more powertrains will be on offer, including diesel variants.

Though the brand boasts about the new Corsa’s responsive nature, we can’t imagine any of its combustion engined variants will be quite as pokey as the Corsa-e, which provides a comparatively potent 136bhp and 207lb ft of torque for an 8.1sec 0-62mph time. Performance figures for the two quoted petrols are yet to be disclosed. 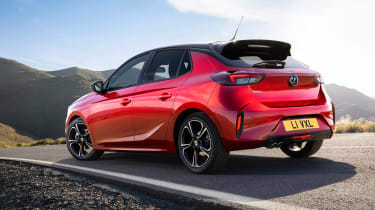 One figure we’re rather impressed with is the 980kg kerb weight, representing a whopping 10% (108kg) saving over its predecessor thanks to new construction methods. As we all know, less weight makes for better performance (and efficiency), so should Vauxhall choose to offer the new car with a little more power, this Corsa could be one to watch. Size remains around the same as the current model, the new one gaining just 4cm in length.

As for a hot VXR variant, there’s no news yet. If the brand was to produce a new Fiesta ST rival, though, it would likely have ties to a future 208 GTi due to the new Corsa’s shared platform with the standard 208. PSA’s current focus lies with electrification rather than performance, however, so you needn’t hold your breath...