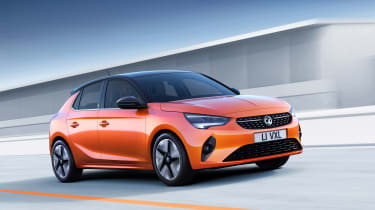 Vauxhall has revealed the all-new 2019 Corsa in electric form before an eventual roll out of conventionally powered models later this year. The Corsa is a crucial model for Vauxhall, consistently selling strongly in the UK while also being the brand’s most popular model. This comes despite the current Corsa’s considerable age, it having been originally released way back in 2006. This new Corsa-e model is an all-electric variant of the popular supermini, but we expect the internal-combustion models to look much the same when they are revealed.

This Corsa is also Vauxhall’s first all-new model since its buyout by PSA, and so has been developed alongside PSA’s own new superminis, such as the incoming Peugeot 208. As a result, the Corsa shares its ‘CMP’ platform with the 208, and in this case its electrified powertrain too, in the process making this Vauxhall’s first all-electric model. Models with internal-combustion engines will soon follow, sharing the 208’s collection of turbocharged petrol and diesel options, although exact specifications for those have not yet been revealed.

In the Corsa-e, the electric motor produces a peak of 136bhp, with 207lb ft of torque available from zero rpm. The motor is mounted in front of the passenger compartment, creating a similar powertrain footprint to an internal combustion layout to streamline the manufacturing process between the two models. The Corsa’s battery is a 50kWh lithium-ion pack, and it gives the car a range of 205 miles on the latest WLTP test cycle. Performance is actually quite brisk for a supermini of this size, reaching 62mph in 8.1sec.

Alongside its new underpinnings, the Corsa-e also introduces the latest interpretation of Vauxhall’s design language, with an all-new body that is entirely different to its French counterparts. The design is rather more demure and understated than that of the flamboyant new 208, though, with a slim grille and clean and simple surfacing.

The interior has also been totally redesigned, and once again is in contrast to the wild, innovative layout of the 208; instead there is a far more reserved and conservative layout to be found. The only visible part carried over from its Gallic cousin is the gear selector, but from here the Corsa’s cabin mimics the more curvaceous aesthetic seen elsewhere in the Vauxhall range. Tech has been significantly improved, though, with a new optional 10-inch infotainment display dominating the dash, and paired with a digital driver’s display and a clean, simple lower dash and centre console.

If you’re waiting to read about an incoming VXR version to rival the Fiesta ST, you may be disappointed, as Vauxhall has not revealed any official plans to develop one. With the Corsa’s close ties to the Peugeot 208, if a VXR were to be in development, we’d expect it to share elements with a future 208 GTi. The issue lies with PSA’s heavier emphasis on electrification than on performance across the group, leaving chances of a high-performance Corsa remaining murky at best. 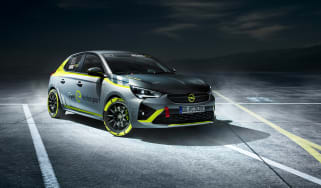