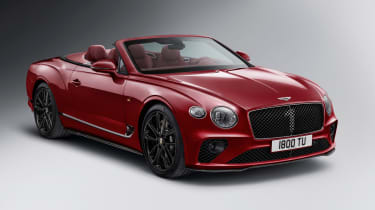 As you’d expect from such a brand in its 100th year, we’ve seen plenty of commemorative limited-run models roll from Bentley celebrating its centennial. Following the Continental GT Number 9 Edition and a special edition Mulsanne comes this Continental GT Convertible Number 1 Edition, a model that pays homage to the No. 1 Bentley Blower of 1929. This final limited-edition model in Bentley’s centenary trilogy will be limited to just 100 units. Pricing is yet to be revealed.

The new model features Bentley’s Centenary package, but setting it apart from an ordinary Continental GT is the addition of 100th anniversary badges at the rear and on the wheels. That wasn’t quite enough for Bentley, though, and so it decided to add 18 carat gold plated centenary badges to the front wings and a painted Number 1 front grille, referencing the old-time racer.

As with Bentley’s other centenary models, a small piece of an iconic model from the past can be found somewhere within the cabin. The Mulsanne W.O. Edition, for instance featured a section of the crankshaft from Walter Owen’s personal car in the armrest, and the Continetal GT Number 9 Edition has a wood insert from the seat of a 1930 Le Mans racer. Continuing the theme, the Bentley has integrated a ‘small wheel spinner’ made from the piston of the No. 1 car itself, within the rotating display. Quite a nice touch, we’d say. 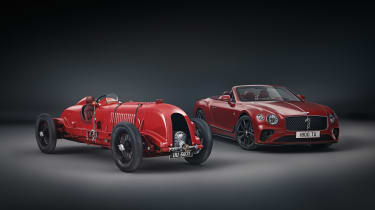 Each of the 100 examples can be finished in either ‘Dragon Red II’ or ‘Beluga’, with a choice of either Claret or Beluga folding roofs. They all also come with plenty of options ticked as standard, such as the Black Line Specification and carbonfibre body kit.

If subtle bling is what you look for in a car, this is for you, as the gold plating doesn’t stop on the outside. The organ stops inside are plated in 18 carat gold too, a stark contrast to the ‘Grand Black’ wood trim. You also get jewelled fuel and oil filler caps. 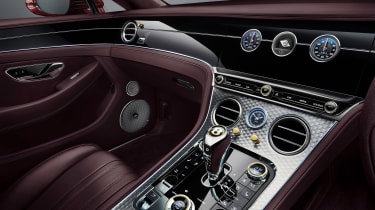 Fitted exclusively with the 6.0-litre twin-turbocharged W12, Bentley says that it’s in an enhanced form, although no information has been revealed. Any improvement on the standard car’s 626bhp and 664lb ft of torque is certainly impressive, mind. An ordinary GT Convertible sprints from 0-62mph in just 3.8secs, and has a top speed of 208mph, figures we don’t expect to change.