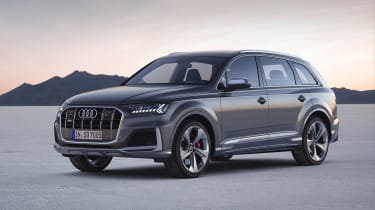 Consider the new Audi Q7 range complete with the reveal of the new SQ7 TDI. Ostensibly its powertrain is identical to that of the previous SQ7 and subsequently the SQ8, combining a deep-chested 4-litre twin-turbo V8 diesel engine with an electric compressor powered via a standard 48V mild-hybrid system.

Numbers are big across the board at 429bhp, with 664lb ft of torque available on a plateau between 1250 and 3250rpm, but they’re somewhat offset by the SQ7’s near-2.4 ton kerb weight. As a result, acceleration times are reasonable, rather than lightning quick at 4.8sec to 62mph. The Q7’s inherently big seven-seat SUV body contributes to the chunky kerb weight, but so too does its plethora of drivetrain hardware designed to, ironically, make the Q7 TDI feel lighter and more agile than it actually is.

One element of the SQ7’s dynamic tech is an active rear-wheel-steering system, which like others of its type steers the rear wheels via a small pair of hydraulic actuators on the rear axle. The rear wheels will turn in the opposite direction to the fronts at low speeds to improve manoeuvrability, and turn in the opposite direction at high speeds to improve stability. Adaptive air suspension is standard fit, so too the aforementioned 48V mild-hybrid system that not only powers the small electric compressor to improve engine response, but also the integrated starter motor and generator, extending the SQ7’s start-stop functionality. Carbon-ceramic brakes are on the options list, as are wheel designs of up to 22 inches. 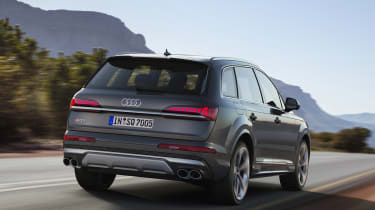 Also available is Audi’s active anti-roll system which utilises a pair of anti-roll bars that are able to be twisted in opposite directions to cancel out the car’s natural body movements under hard cornering. On the straight ahead, the anti-roll bars decouple, keeping the ride supple and loose-limbed. Finally, Audi’s Sports Differential is also available, giving the SQ7 power-torque vectoring on the rear axle, although it’s not quite capable of eliciting power on oversteer like with the system found in a Mercedes-AMG A45 S.

As with the standard Audi Q7, the interior represents the biggest single leap over the previous model, swapping the A4-like layout for one shared with the new Q8, featuring Audi’s new dual MMI touchscreen system. The final big number is the price, as all this metal doesn’t come cheap at around £76,400 in the UK before options. Deliveries start in the Autumn of this year.