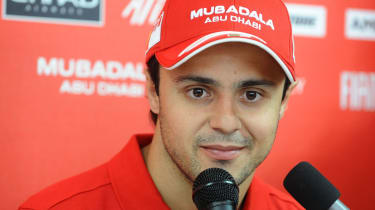 Ferrari’s Felipe Massa has returned to a Formula 1 car for the first time since his injury in July.

He was stuck by a loose car part and went on to crash during qualifying for the Hungarian Grand Prix, resulting in a fractured skull. It prompted a planned return to the sport from Michael Schumacher, which was latter canned due to injury.

Massa has been in rehabilitation since, and testing in Ferrari’s F2007 racing car is the latest step towards driving in Formula 1 again. He’ll be returning in 2010, with Ferrari quelling rumours of a return to action before the end of this season.

‘It is simply an opportunity for Felipe to renew his acquaintance with his natural environment, namely the race track’, the Italians said of today's testing.

Massa will return at the start of the next season with Fernando Alonso as his teammate, the Spaniard leaving Renault to join the Prancing Horse. Read about that here.