The Veritas RSIII Speedster supercar goes on sale; 0-62mph in 3.2sec and 215mph+ 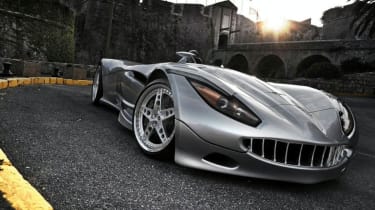 The utterly nuts Veritas RSIII Speedster is now on sale.

We drove it last year, and found it to be rather good, and after a few styling tweaks and an engine transplant you can now land yourself one – so long as you can meet the asking price of around £300,000, that is.

The RSIII now uses the 5-litre V10 from the current BMW M5, ensuring a potent 500bhp is on tap, transferred to the rear wheels via a seven-speed sequential manual gearbox.

In a car that weighs just a tad over a ton, at 1080kg, that ensures a 470bhp power-to-weight ratio and hence some pretty lairy performance. The 0-62mph dash apparently takes 3.2sec while the top speed is rated as 215mph+. Although we can’t imagine such speed is entirely comfortable in the absence of a windscreen and roof…

The skinny weight is largely thanks to a light carbonfibre body and tubular frame structure, while the brakes are ceramic. As per usual with performance cars these days, there’s been extensive testing at the Nürburgring’s Nordschleife, with Veritas claiming a proper racing car experience.

Just 30 will be made, with each car taking 15 people around eight weeks to construct. The company claims eight sales so far, with plenty of interest to sell the other 22.

Of course, your £300K could also go towards the new Lexus LFA if you like your supercars to boast a roof and full compliment of windows…

Read our car review of the Veritas RSIII Speedster concept