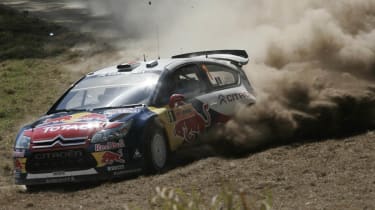 Sebastien Loeb has won a sixth World Rally Championship. It extends his record for title wins, with Loeb boasting the most successful WRC career.

He grabbed the drivers’ crown at 2009’s final WRC round piloting his Ctroen C4 in Wales, but for once it was by the narrowest of margins, his 93 point total being just one ahead of title rival Mikko Hirvonen’s. Loeb had trailed Hirvonen by a point going into the weekend clash, too.

‘It's been an incredible season,’ Loeb said. ‘We made a good start then we lost everything and we came here one point behind Mikko. Finally we've done it and I'm really happy but Mikko has been extremely strong. I know it will be tough next year for sure.

‘This has been one of my best title wins; the battle was so intense - going almost until the end of the last rally. It was incredible. We have had some highs and some lows this year but we finished with the victory. It’s an incredible feeling!’

Loeb’s record now stands at six titles and 54 WRC rally wins, and he's even become a 'Sir'.This year merely extends his record as opposed to setting a new one, so how much more does he have to prove? How long will he continue World Rallying?

‘I don't know. As long as I can, for sure. I drive because I like to, so I’ll carry on as long as I feel that way. When I feel that I'm not motivated enough, maybe then I’ll stop. Having a fight like today though was really exciting. I enjoyed it a lot.’

A year ago Loeb was linked with Formula 1, rumours circulating that after the end of this season, he would slot onto the F1 grid at the beginning of 2010. It appears that this isn’t the case.