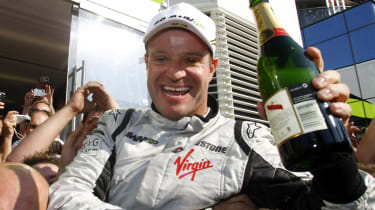 The Formula 1 driver merry-go-round has begun. With the season closing at Abu Dhabi last weekend, next year’s grid is starting to thrash out.

After recent news that Fernando Alonso will team up with Felipe Massa at Ferrari, Williams’ pairing will be Brazilian veteran Rubens Barrichello and German newcomer Nico Hulkenberg.

The former should be pretty well known, with next year being his 18th season in the sport. He had a rather good 2009, finishing third in the drivers’ standings, his best finish since a runner-up slot in 2004. It looked unlikely that he and Jenson Button would remain as partners at Brawn GP for 2010, and Barrichello is the one who has left the team.

It makes him the first GP race winner to drive for Williams since Ralf Schumacher and Juan Pablo Montoya in 2004. Williams team principal Frank Williams said: ‘He is not only the most experienced driver in Formula 1 but a passionate and talented driver who fought hard for the drivers' championship this year.’

Hulkenberg is a lesser-known quantity, the 22-year-old joining Formula 1 for the first time next year having won the 2009 GP2 Championship as well as previous F3, Formula Masters and A1 GP titles. He was Williams’ reserve driver this year.