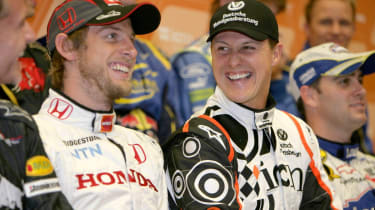 The 2009 Formula 1 season might have come to a close yesterday, but that doesn’t mean the end of motorsport. This week sees the Race of Champions take place, the end of year shindig that brings together the finest men from all areas of racing to see who’s the best.

It’s moved this year, though – as well as being held a month earlier it’s also taking place at China’s rather impressive Bird’s Nest stadium in Beijing.

It’ll be a fantastic chance to see newly crowned Formula 1 world champ Jenson Button take on one of the sport’s greatest racers, Michael Schumacher. The latter will be defending the Nations’ Cup with fellow German (and F1 title runner-up) Sebastian Vettel, the pair looking to win it for a third year in a row. The 2008 Race of Champions drivers’ title holder, rallymeister Sebastien Loeb, won’t be there to hang onto his honours.

Cars used for this year’s event include WRC-spec Ford Focuses, KTM X-Bows, VW Sciroccos and, of course, the Race of Champions buggies.

You can watch the Race of Champions – which takes place November 3 and 4 – by heading to Radio Le Mans online and watching its free broadcast. Click here to head there now.