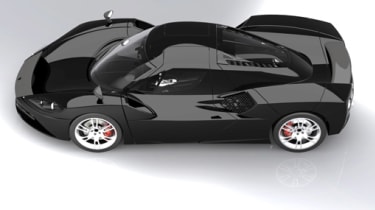 It’s time to welcome a new British supercar in the shape of this, the Arash AF-10. These are the first pictures showing what the production coupe’s going to look like. And there’s certainly more than a shade of Ferrari Enzo about it, in both shape and proportions, although it’ll cost quite a bit less at around £320,000. That might strike you as rather steep for a British sports car, even beside the £200K Noble M600, but compared to its Leicestershire contemporary, the AF-10 boasts a more trick structure, with carbonfibre used almost everywhere. The engine, aluminium double wishbone suspension and fuel tank and steel roll cage are a few exceptions. The chassis design is patented to Arash, and consists of carbonfibre with an aluminium core.  Of course, being a supercar, power is equally key. The AF-10 boasts a nicely potent 550bhp from a Corvette Z06-sourced 7-litre V8 engine. Torque is set to be 475lb ft, with a top speed of around 205mph on the cards. The car’s light weight (expected to be around 1200kg) should ensure some fairly brisk acceleration figures. Power goes to the rear wheels via a six-speed manual gearbox. Happily, an even madder version of Arash’s first supercar is planned. The AF-10S would add a whacking great supercharger to the ‘Vette engine taking it to 800bhp and 553lb ft. That would mean a Bugatti Veyron-besting 677bhp/ton… We’ve got the base AF-10 to come first, of course. It’s the first car Arash Farboud has completed, after his first project – the Farbio – was took over by someone else. Read our drive of the Farbio GTS350 against its rivals here.