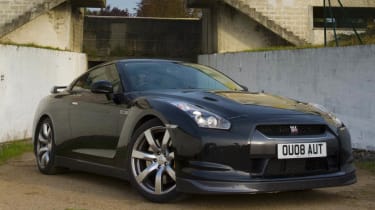 Today’s the turn of 2003. Peruse the performance cars below and get voting this way. The link takes you to the community, where if you scroll down to the bottom you’ll find the voting panel. Head to the Forum if you want to do more than click…

Nissan GT-R (click car names for content)Perhaps we didn’t sum up the Nissan GT-R in quite the right way when we concluded Car of the Year 2008. ‘Devastatingly cost effective’, wrote David Vivian, ‘head rules heart’. Perhaps the thin air at the top of Mont Ventoux had got to him, but more likely he was still, days later, in awe of what the GT-R is capable of. So it wasn’t as emotionally beguiling as the Gallardo or Alfa 8C, but boy this is so much more than a cut-price digital supercar. Searingly fast yet so precise and detailed to drive, underpinned by real mechanical feedback. One of the most technically astonishing cars of the decade is proof positive that technology can enhance the driving experience. Lamborghini Gallardo LP560-4Done out of the number one spot by the Nissan GT-R, the new Gallardo was rightly praised for its nibbly feedback and utter security. Even Le Mans racer Andy Wallace hopped out full of praise – ‘there’s no feeling of any body-roll whatsoever, yet that’s not translated into the back sliding everywhere. It’s got heaps of grip.’ Unfortunately it also had ceramic brakes that David Vivian commented ‘feel as if you’re pushing against a lump of plasticine that’s just been taken out of the fridge’. The automated manual felt harsh and thumpy after the Nissan twin-clutcher, too. Still, you can’t take away the Lambo’s sense of occasion, majestic engine and pugnacious attitude.  Porsche 997 GT2The GT2. The initials alone tell you all you need to know, this model feeding twin turbo power to just two wheels to create Porsche hairiest model. And yet as Henry Catchpole noted, our third placed car ‘has the best steering here, the best brakes and a fantastic gearshift. It’s a wonderful, wonderful thing’. Not as unnerving as you might expect, the 997 generation GT2 mates power with finesse to create a hugely absorbing machine. Renaultsport Megane R26.RFourth place for a hot hatch? Oh yeah. In fact with hindsight, many of us here think we might have sold the R26.R a bit short in eCoty 2008. It whipped nine rivals in round one to win the chance to battle it out with the big boys on Mont Ventoux and as David Vivian pointed out – ‘it mixes it, nose to tail, with the Lambo, Porsche and Nissan. No quarter given.’ There has never been a more honed hot hatch. John Barker summed it up – ‘It turns everyone into a hero’. Alfa Romeo 8C CompetizioneAlthough we don’t generally like to admit it, you’ll forgive us for revealing that captivating beauty helped elevate the Alfa 8C into the top five. Smaller, tauter and faster than the Maserati GT with which it has much in common, it also proved a fair bit edgier at the limit, with Henry Catchpole commenting – ‘It’s a car best experienced at six-tenths and then you’d love it to bits’. Still, the crackling V8 and peerless bodywork was enough to edge both the Maserati and Aston’s V8 Vantage into the lower orders.

So, they’re your contenders for 2008. Click here to vote for your favourite and use the eCotd Forum thread to air your opinions or tell us about cars that should be here. And don’t forget to come back tomorrow for the best of the decade's final year... Follow evo on Twitter or join our Facebook page