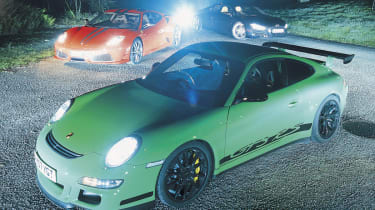 Today’s the turn of 2007. Peruse the performance cars below and get voting this way. The link takes you to the community, where if you scroll down to the bottom you’ll find the voting panel. Head to the Forum if you want to do more than click…

Porsche 997 GT3 RS (click car names for content)2007’s eCoty shoot-out boiled down to a colossal ding-dong between two greats of the performance car firmament – Porsche and Ferrari both fielded perhaps their strongest cars in years; the 997 GT3 RS and the 430 Scuderia. The Porsche won, with six out of nine judges placing it first. How? ‘Stupendous engine, incredible steering and a chassis you’d never tire of’ was John Barker’s summation. Both Dickie Meaden and Roger Green thought it was the best 911 they’d ever driven, with Peter Tomalin concluding that it felt that bit more organic, more feelsome than the Scuderia. Ferrari 430 Scuderia Although both this and the Porsche have a similar remit – to bring track thrills to the road, they go about it in totally different ways. The Porsche eschews technology, the Ferrari embraces it, yet here the paddle-shift transmission and switchable Manettino modes help rather than hinder; the Scuderia is a fantastically captivating car to drive. Dickie Meaden – ‘Drive the Ferrari on the road and it just sucks you in completely’.  Audi R8 V8Audi’s first stab at a mid-engined supercar proved to be pretty good. OK, utterly brilliant. The R8 made it to the top of a couple of people’s scorecards for the effortless way in which it managed to combine phenomenal driver appeal with such a forgiving, supple nature. David Vivian was ‘stunned by the reach and breadth of the R8’s repertoire’, while Jethro Bovingdon felt it was ‘everything Audis haven’t been for as long as any of us can remember’. Mercedes CLK63 AMG Black‘A real hooligan’ said Roger Green; ‘just a fantastic front-engined rear-drive sports car’ was John Barker’s take. The CLK Black’s only real weakness was the only part Mercedes was responsible for – the paddle-shift auto gearbox. Everything else was pure AMG and hugely intoxicating, especially the 6.2-litre 500bhp V8 and an almost perfectly balanced chassis that made oversteer so accessible and exploitable. The first time in a long time that Mercedes has got the better of a BMW M car. BMW M3It’s easy to take the M3 for granted, to imagine that BMW’s M division can churn out cars like this without apparent effort. But that’s just a mark of the firm’s expertise, as David Vivian found, ‘nothing much detectable in the way of personality, but cool under pressure and truly rapid when it counts’. Others were more taken with it on the roads of the Auvergne region of France, Henry Catchpole confessing that the M3 ‘really has blown me away’, while Meaden noticed ‘the more I drive it, the more impressed I am’. It’s all too easy to underestimate the BMW M3 – don’t forget that at eCoty 2007 it got the better of the Lambo Gallardo Superleggera, Lotus 2-Eleven and Aston Martin DBS amongst others.

So, they’re your contenders for 2007. Click here to vote for your favourite and use the eCotd Forum thread to air your opinions or tell us about cars that should be here. And don’t forget to come back tomorrow for the best of 2008… Follow evo on Twitter or join our Facebook page