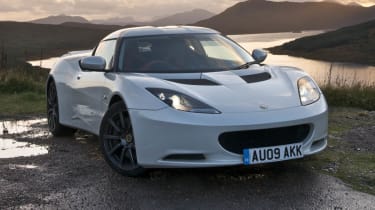 Today’s your last chance to have a say - we've reached 2009! Peruse the performance cars below and get voting this way. The link takes you to the community, where if you scroll down to the bottom you’ll find the voting panel. Head to the Forum if you want to do more than click…

Lotus EvoraLotus isn’t one to let itself down. We knew the Evora would be good, but in a 13-strong line-up at this year’s eCoty we seriously doubted its ability to hold off some strikingly talented rivals. The fact it saw them all off despite some notable weaknesses – a less than exciting Toyota-sourced powerplant and slack gearshift – is a testament to the Lotus’s strengths in other areas. It’s a smooth-riding GT car that handles as delicately, as nimbly, as accurately as you could ever wish for. Porsche 997.2 GT3The journey north to Skye did not show the 997 GT3 in the best light. Rock hard ride, shell-like seats and droning road noise all conspired to make the GT3 awkward to live with. But once there it came alive. The fear had been that the latest GT3 had ventured too far towards the racing edge, too much grip, not enough fluency. Wrong. As Ollie Marriage said in Scotland, ‘It’s as wieldy as the Evora, yet packs the dynamic punch of the supercars here. It’s edgy yet trustworthy and the clarity of communication is dazzling.’ In any other year it may well have been enough to win… Noble M600Porsche GT2? Pussy cat. For proper old-school thrills (let’s call them thrills, even if the truth is somewhat browner) the M600 took some beating due to the imbalanced equation created by 650bhp on one side and 1250kg and no traction control on the other. So, the hairiest car at eCotY 2009, but also perhaps the most poised and athletic with gorgeous steering and phenomenal damping. Not a car you’d feel comfortable driving in a set of wellies, but treated with respect it’s fabulously exploitable. Lamborghini Murcielago LP670-4 SVIn the battle of the big guns the mightiest Murcie came off second best to the Noble, but I’d wager that the Lambo will provide the more vivid memories. Chiefly those of the noise the 6.5-litre V12 makes when you open the taps in third gear. ‘Passionately manic with endless reach’ was Catchpole’s verdict on the engine, but arguably more remarkable was its behaviour: purer, more precise than the LP550-2 Balboni. Far friendlier than its looks and size suggest, ‘you find yourself driving it like a sports car’ said John Barker.  Renault Clio 200 CupThe R26.R last year, and in 2009 the Clio 200. Renaultsport really is a regular at the good end of our eCoty challengers. A thorough reworking of the 197, the Clio 200 Cup proves you don’t need to spend big money to have a true hardcore driving experience. Although some felt it was slightly overawed in this company, it gave as good as it got, carrying speed through corners the wide-bodied supercars couldn’t match and delivering people back with wide smiles and tall tales.

So, they’re your final contenders. Click here to vote for your favourite and use the eCotd Forum thread to air your opinions or tell us about cars that should be here. And don’t forget to come back next week when all the ten winners (view them here) will canvas for your Car of the Decade vote. Follow evo on Twitter or join our Facebook page