Race day in the MX-5

To celebrate the MX-5's 20th birthday Mazda is holding an Endurance race. Evo is taking part 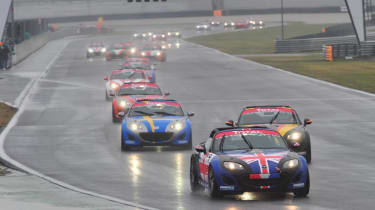 We're in Italy at the Adria racetrack near Venice to take part in an MX-5 Endurance race. 26 European countries are taking part, the cars have standard 160bhp engines and gearboxes, but modified suspension and would be on slick tyres were it not for the pouring rain.

Today is race day, with kick-off at 1pm. Yesterday was practice and we lost much of the first session because one of my team-mates had a coming together with the barrier. You can read about that here.

Oh by the way, the Belgians won, with Portugal second (they were just happy to beat Spain) and Hungary third. Belgium wins. Who’d have thunk it?

Twelth. Mark drove a blinder and overtook the Germans on the penultimate lap. The other UK car wound up 27th out of 29 having covered 113 laps, while we managed 119. The winners did 125.

Pit garage (where I’m writing this, sitting on a pile of tyres) has gone quiet. Everyone’s standing on the pit wall. Just ten minutes left.

Mark’s flying. We’re just starting to hear some tyre squeal so the track’s drying, but all the same he’s running 1.44s and is pretty much the quickest man out there. We’re seven laps down on the leaders, though.

Been an eventful last 40 minutes. The Turks have been thrown out for an illegal driver change, the suspiciously rapid Belgians have dropped from first to sixth, the Russians have swiped the wall but are still running and we’re about to put our last man out. We’re currently 20th. Mark Ticehurst has got masses to do if we’re to get the top ten place we want.

Oh, by the way, my heart rate monitor didn’t work yesterday, but it did today. From a resting average of 60 beats per minute, I peaked at 145bpm and averaged 116bpm. Who said driving a car wasn’t cardio work?

What a ball! That was so much fun, managed to keep it pointing the right way all the time and ran 1.48s for most of my stint. Had a few good dices, managed to overtake more than overtook me and got us back up to 8th spot. Gained places and not smashed it up. Good news all round. Getting Simi into the car went pretty smoothly, too, although the fuel took ages to flow down the bowser pipe.

Owen’s on his in lap, car’s now covered in mud spat up by the bloke in front of him. Better go.

Things haven’t got any better. Both Owen and Autocar’s Matt Prior have slipped down the order further. As I leave for the refuelling area and my stint, Owen’s 15th and Matt’s 20th. Bugger.

We’re slipping a few places down the grid. The guys who did the qualifying yesterday have to start the race today, and we know Owen’s capable of running at their pace, but he’s dropped three places already. Looks like we might have got the set-up wrong.

Start is going to be under a safety car for three laps. It’s not raining but it’s still very wet and slippery. Belgium, Russia, Germany and Portugal are all up the sharp end, with us just behind in sixth.

They’ve clearly raided the local community for the grid girls.

Lunch. Getting it in early just in case I get an attack of the nerves closer to the start

Practicing our driver changes and refuelling (we’ve got four compulsory fuel stops during the race, with driver changes at the same time), which is more complex than it sounds – or perhaps my brain’s capacity to learn is switched off at the mo. Loosening the belts and sliding the seat back shouldn’t be this hard to remember, not even when we’ve got to operate a fuel bowser, too.

Back in from my stint. The car’s very twitchy and nervous under braking especially into turn two and builds oversteer too easily on the exit. Feels nicely balanced mid-corner though and is great fun to drive. We’ve stiffen the front up a little.

Got one warm-up before the race it’s only 30 minutes and we’re going to use it for Simi and me to get a bit more track time. I have a quick go on the Scalextric Mazda has set-up while Simi’s out on his stint.

Driver briefing covered much of the same ground as yesterday which made a few nations a bit restless. Not helped by the Norwegians trying to dob in those who hadn't obeyed every letter of the regulations. It seemed to work, though, as four countries were held back to be told they'd been penalised 10 places. Oddly, our penalty doesn't seem to have stood from yesterday and we're sixth on the grid.