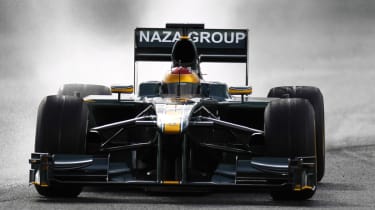 The F1 field is halfway through the third 4-day pre-season test, and despite being at Jerez they’ve been suffering constant damp conditions, which makes assessing the early pace setters very difficult. Reading between the lines and the fuel loads McLaren and Ferrari look to have the edge with Red Bull and Mercedes just behind. Of the new teams Virgin is now racking up laps and Lotus started well yesterday, running 76 laps on their its day. Unfortunately this morning’s running was curtailed early for the Malaysian-backed team when Kovalainen crashed out and broke the front wing. A new one is being fabricated and will be sent out tonight.  The returning Sauber team looks impressively strong, with Pedro De La Rosa turning lap times that are a match for Rosberg’s Mercedes, and the first post-Flav Renault is running consistently in the hands of debuting Russian Vitaly Petrov. There are constant rumours surrounding the viability of the other two new teams, as neither Campos nor USF1 are likely to have cars ready the opening Grand Prix in Bahrain on March 14th. The American team have seemingly lost their major sponsor and cancelled its crash testing and all press interviews, which doesn’t bode well. The Spanish Campos Meta outfit may be saved by a new investor, but suggestions that Volkswagen could be involved appear to be unfounded. If either of these teams fall by the wayside, Stefan GP are waiting in the wings. The Serbian team will run the defunct Toyota team’s 2010 chassis and engines, and according to reports they are close to signing up 1997 champion Jacques Villeneuve. Schumacher vs Villeneuve - now that’s a battle no-one would have dared predict six months ago.

Sitting alongside the more focused GT410 Sport, the new Lotus GT410 aims to offer greater practicality and comfort than before